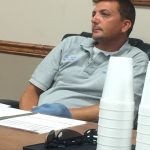 About 24,000 gallons of raw sewage was spilled at the Summerville Wastewater Treatment Plant on March 26, according to city officials.

Here is the official release from the city of Summerville:

“On Monday, March 26th, 2018 at approximately 5:07 p.m. the Waste Water Treatment Plant noticed a spill occurring approximately 50 feet off the right of way of Red Oak Rd. up the Industrial Park sewer line at a manhole.

“The Public Works Dept. was notified of the spill occur ring. It was discovered that the spill was caused by a build up of debris blocking the sewer line approximately 150 yards downstream from where the spill occurred.
“City crews were able to unblock the line and the spill was stopped by 6:00 p.m. It was estimated that the spill occurred approximately 2 hours and about 24,000 gallons were spilled. EPD was notified immediately of the spill and a monitoring program of the receiving waters upstream and downstream from the affected area has been put in place and will continue to be monitored for one year as required by EPD guidelines.”