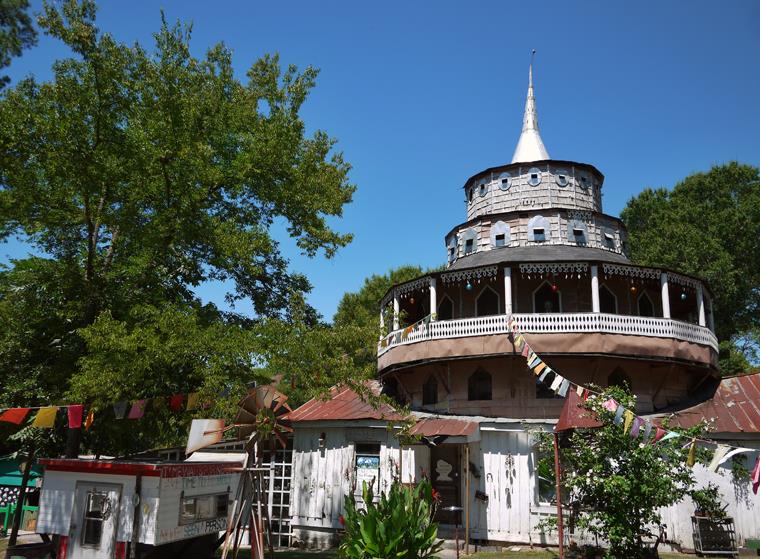 Summerville, GA — Paradise Garden Foundation has been awarded a National Endowment for the Arts (NEA) grant of $55,000 for planning a major restoration of the World’s Folk Art Church, the signature structure of Howard Finster’s Paradise Garden folk art environment, the NEA announced today (5/9/18).

In the NEA’s second major funding announcement for fiscal year 2018, Chairman Jane Chu said she approved more than $80 million in grants nationwide. The Art Works category is the NEA’s largest funding category and supports projects that focus on the creation of art that meets the highest standards of excellence, public engagement with diverse and excellent art, lifelong learning in the arts, and/or the strengthening of communities through the arts.

“It is such an honor to be selected for a major Art Works grant by the National Endowment for the Arts,” said Paradise Garden Executive Director Tina Cox. “We are appreciative of the NEA’s endorsement of our ongoing efforts to return Paradise Garden, Howard Finster’s greatest creation, to prime condition. And how appropriate that the NEA’s support is for the Garden’s most recognizable and most inspired work of vernacular architecture.”

Though Finster structures including the Rolling Chair Ramp and Bottle House have been restored, and a Visitor Center constructed, since the Paradise Garden Foundation became steward of the garden, the World’s Folk Art Church is an undertaking on a scale more challenging in every way. The Foundation added internal wooden supports several years ago to secure the structure. But its condition has continued to deteriorate, especially its fanciful exterior facade, which evokes an oversized homemade wedding cake.

For visitor safety reasons, the World’s Folk Art Church has been closed for many years.

With the Art Works funding, the Paradise Garden Foundation will hire an architect or firm specializing in historic restoration to develop a conservation plan. The Art Works grant also will cover the archiving of Finster materials in the Church. The conservation project is expected to cost $800,000 to $1 million.

“Fund-raising for a project of this proportion will be a challenge, but we have faith and determination that it can be done,” said Paradise Garden Foundation president Eddy Willingham.

Willingham said the 17-member Foundation board is buoyed by the restoration successes over six years at the Garden, where conditions have improved markedly since it appeared on the Georgia Trust for Historic Preservation’s 2010 list of 10 “Places in Peril” across the state.

Those successes include a five-star-rated airBnB in a converted house once owned by Finster, diagonally across the street from the current Garden entrance. Construction is nearly complete on a second airBnB unit next door.

Finster began working on the World’s Folk Art Church, in 1981 after acquiring a one-story, frame church built in 1960 on Rena Street. He purchased the building for $20,000, including a $5,000 grant he received from the National Endowment for the Arts. Without blueprints, he added a tiered tower with a colonnade gallery from which visitors could view the gardens. It was the site of weddings and other events in its heyday. Finster, who established one of his several Paradise Garden studios inside the structure, “envisioned the church as a place of refuge for visitors and as a place to exhibit folk art,” according to the National Register listing.

Willingham and Cox believe that the NEA Art Works grant constitutes a “Seal of Approval” that the Foundation can use to leverage additional funding in coming months. The Art Works grant is a matching one, meaning that the Paradise Garden Foundation must first raise $55,000.

“Through the work of organizations such as the Paradise Garden Foundation in Summerville, NEA funding invests in local communities, helping people celebrate the arts wherever they are,” said NEA Chairman Jane Chu.

The grant is being announced as the Paradise Garden Foundation gears up for Finster Fest, the Foundation’s largest annual fund-raiser, May 26-27 at Paradise Garden. It features a market of 60-plus (mostly folk) artists, live acoustic music, children’s art-making area, and BBQ and other food and drink. Many of the artists — coming from nine Southeastern states plus Illinois, Missouri and Wyoming — are drawn by the opportunity to show their work in one of folk art’s most hallowed places.