George Walter Presley has been captured, according to Chattooga County Sheriff Mark Schrader. 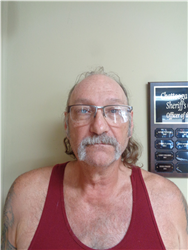 The Chattooga County Sheriff’s Department is asking the public’s help in locating a sex offender who raped an adult woman for the last two days, according to Sheriff Mark Schrader.

George Walter Presley, 64, of 2470 Fish Hatchery Road, Summerville, lured a woman to his house and then sexually attacked her, according to the sheriff.

“He offered to help a female that was having a vehicle problem,” the sheriff said.

The woman, who does not live in Chattooga County, was not familiar with this area. Her vehicle broke down at a local convenience store when Presley approached and offered to repair the car.

“She could not tell us the name of the convenience store. She is not from here,” the sheriff said.

After luring her to his home in hopes of repairing the car, Presley attacked and forced her to take pills, the sheriff said. Officials aren’t sure how long Presley held her captive.

“He pilled her up. She is a little confused on her dates,” the sheriff said.

The sheriff believes the woman was held for two days. Then around 7:50 a.m., Presley allowed her to go outside. She then ran to a nearby house for help.

Sheriff’s Investigator Jason Burrage has taken a warrant for rape and false imprisonment against Presley. He has fled in a white 2016 Jeep Compass.

“May be in possession of a weapon. If you see or know his whereabouts, do not approach,” a flyer released by the sheriff’s department states.

Presley is a registered sex offender in Chattooga County. His original charge was rape of a minor, for a crime he committed in Texas.