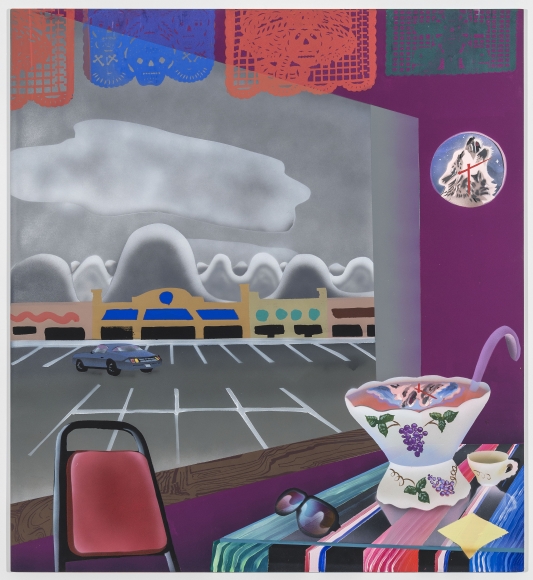 A New York artist’s visit to Chattooga County has inspired at least two paintings that are now part of an exhibit in her hometown.

Artist Melissa Brown’s recent collection of works is featured at the Derek Eller Gallery in New York City. The exhibit that started May 31 and ends July 6 features the artist’s rendition of a Summerville Mexican restaurant and Pennville’s Paradise Garden folk art museum.

“We stopped for lunch at a Mexican restaurant in Summerville, Ga., and we followed that by combing through Tupperware bins atop aisles of folding tables in a dusty parking lot swap meet. Hunting for discarded, mis-marketed artifacts of long forgotten American desires has an addictive quality, like any slot machine, or Candy Crush. You never know when the payload will arrive,” according to Brown.

“In October I flew down to Tennessee for a friend’s wedding, then got a rental to drive farther south. As a New Yorker without a car, merging onto the grid of US highways feels like exhilarating exploration: a mini-episode in the ultimate, aimless American road-trip. Running amok on the Northern continent, deciding by wit and will, reassuring your ability to survive without the bureaucratic safety net, peeling out and slamming into being in the right place at the right time, the fantasy that reality is changeable: it’s what keeps us alive. . . ” Brown said. “. . .The destination for that day was Paradise Garden, created by Howard Finster in the 1960s. It seemed like nature was slowly winning the battle against artistic vision (the Master had departed over 17 years ago), which made me feel like I was visiting the Empire just beyond the height of glory, on thedescent of the bell curve. Video of Finster on the Johnny Carson Show revealed that he had strolled the earth with complete confidence, upstaging the late night comedian with unwavering rantings about God. When you’re convinced by an idea larger than yourself there’s no stopping you. The gift shop attendant circled mirror house on the xeroxed map of the grounds: “That’s a highlight,” he said. Fifteen minutes later I stood in the mirror house, an Insider staring out at the Outsider’s Utopia made of junk: bottle caps, cast metal toys, broken pistols, ceramic shards pressed into cement now overgrown with vines. It was a hand-made fun house on stilts with faux foreign décor; the entire structure swayed in the breeze as I looked through the window at the weeping willows in front of the rolling hills beyond a kissing bridge. My view was blocked by a white picket fence. Or at least that’s how I think I remember it.”

Brown lives and works in New York. She is a member of the artist-run gallery Essex Flowers and has mounted solo exhibitions most recently at Roberto Paradise, San Juan, Magenta Plains, New York and The Journal, Brooklyn. She has participated in group exhibitions at Mass MOCA, Canada, Gavin Brown’s Enterprise, Klaus Von Nichtssagend and Musée International Des Arts Modestes. In 2012 she was awarded the Joan Mitchell Painter’s Grant. This will be her first solo exhibition at Derek Eller Gallery.

Derek Eller Gallery is pleased to present Between States, an exhibition of new paintings by Melissa Brown. Combining various techniques including oil painting, screen printing, air-brush, and stenciling, Brown has constructed a series of complex and fantastic images depicting familiar and hallucinatory places. Influenced by painters Grant Wood and Roger Brown (among others), she has mined nostalgic imagery to assemble a body of work on aluminum panels which are distinctly and disarmingly American. In these paintings, loaded iconography is collaged together to depict memories of specific places throughout the American landscape. In California Common Law, Brown compositionally references Van Eyck’s Arnolfini Wedding Portrait while depicting a young hippy couple. These two fur-clad bohemians sit by a wood burning stove looking out over the Northern California hills with a cringingly cliche copy of Be Here Now on their bookshelf and equally stereotypically apathetic looks on their faces as if to express displeasure with their own lackluster utopia.  Here and throughout Brown’s paintings, she depicts layers of regional and cultural signifiers by flattening them into a graphic language which references our shared experiences. 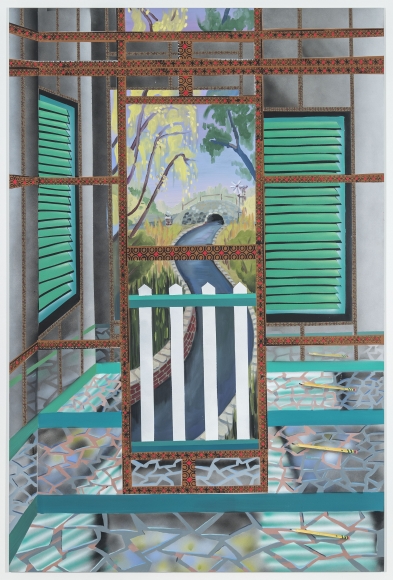