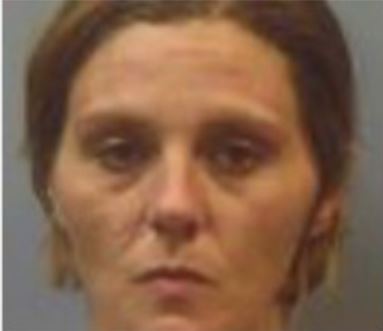 A Summerville woman is accused of drinking a beverage laced with cocaine, stealing a car and then driving it fast into the city, according to a Chattooga County Sheriff’s report.

” . . .And, it sounded like it was in first gear,” Deputy Nicole Sprague was told by Officer Stricklin at the traffic stop.

The car was zooming in and out of traffic and ‘fishtailing’ on the wet road. Officer Stricklin witnessed the car driving down the center turning lane on Commerce Street for about 300 yards.

Strickland approached the driver who appeared “antsy.” He identified her as 35-year-old Sara Charlene Thomas, of Summerville. She told cops that she had been drinking a beverage laced with cocaine, according to police information

Upon checking his computer database, the officer discovered Thomas did not have a license or insurance. But that’s not the only problem he discovered. The car wasn’t hers. It belonged to Rhonda Baggett and Casey Wimpy.

“The vehicle in question was registered to Casey Wimpy who is Miss Baggett’s brother. Miss Baggett advised [Wimpy] helped her get the vehicle because his credit was better than hers, however, she makes the payments and it is her vehicle,” Deputy Sprague stated.

Thomas stole the car after being given a ride around 9 p.m. Thursday. The two knew each other and Baggett had given Thomas rides in the past. On a previous encounter, Thomas left personal items in Baggett’s car.

“Miss Baggett advised Miss Thomas that she did have the items and offered Miss Thomas a ride home because it was raining,” Deputy Sprague stated.

Before reaching Baggett’s house, she completed a few errands and stopped to visit a friend’s house on Williams Cemetery Road near Trion.

During the visit inside the friend’s house, Thomas asked if she could use the bathroom.

“Miss Baggett realized that it was taking her a long time to use the bathroom so she checked to see where she was. At this time, Miss Baggett saw that Miss Thomas was gone and so was her vehicle,” Deputy Sprague stated.

Once noticing her car was missing,  Baggett and her friend started driving around the county looking for it. As they were traveling south on Commerce Street they noticed the vehicle was stopped and cops around it.

“Miss Baggett advised she did, in fact, want to press charges on Miss Thomas for stealing her car,” the deputy stated.

The car, possibly having been driven in first gear at high speeds, was damaged and had to be left at a vacant lot on Commerce Street.

“[Baggett] advised the clutch is probably broken and they would make arrangements to have the vehicle removed,” Officer Stricklin stated.