Summerville Police officers found a half of an ounce of methamphetamine in a red GMC truck they stopped Friday night, according to incident reports.

Officer Gary Pruitt stopped the truck because the registration on the vehicle had been canceled. The driver was 38-year-old Kenneth Dewayne Hines, of Lyerly. Immediately cops found a small amount of meth in Hines’ possession. Then they checked further.

“Sgt. David Westbrooks recovered a larger plastic corner baggie of suspected methamphetamine that appeared to be approximately half an ounce in weight from the interior of Hines’ truck,” Officer Pruitt stated. 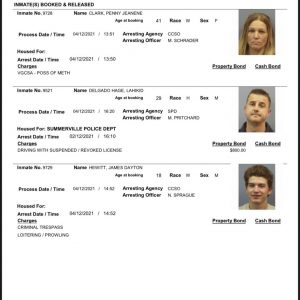