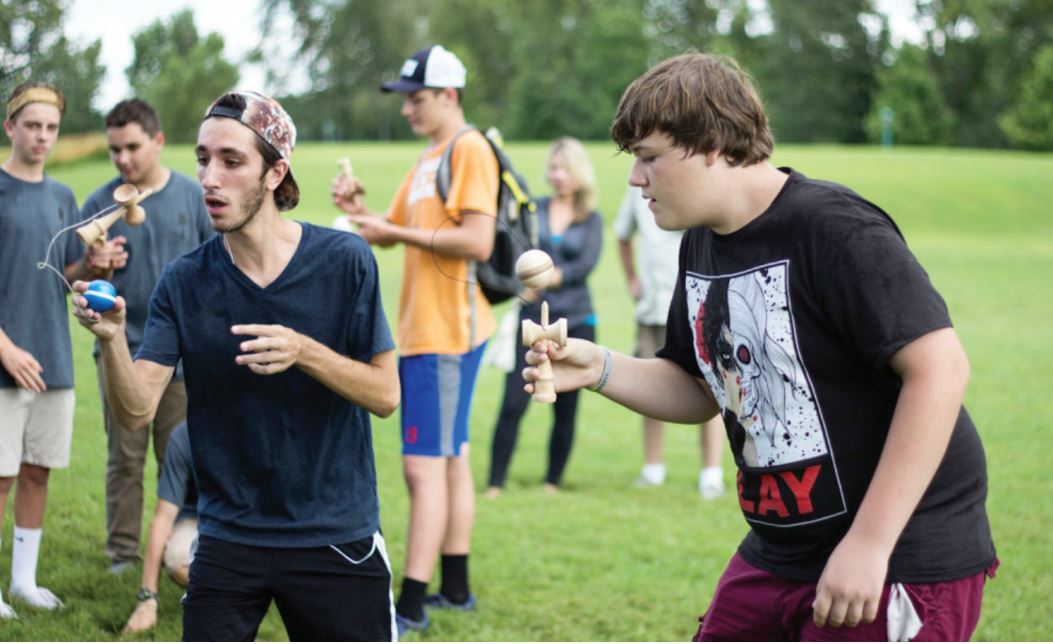 By GENE ESPY
Editor
Alex Mitchell is a student at Chattooga High School and picked up a kendama and played with it for a while and since that first encounter has turned what many people consider a toy into an obsession that has led to him winning a competition in Kentucky and aspiring to the world meet in Japan in a few years.
The kendama “sword [and] ball” is a Japanese toy. The ken has three cups and a spike which fits into the hole in the ball. The kendama is a variant of the classic cup-and-ball game, and the Hispanic world toy known as boliche or balero. The principle of these toys is the same: catching one object with another, where both are joined by a string. However, the modern kendama style takes influences from a diverse range of skills including yo-yo, diabolo, juggling and dance, according to Wikipedia.
The origins of the game are disputed. It has been described as a variation French ball-and-cup game bilboquet which dates to the 16th century. It is generally agreed that Kendama dates to the late 17th or early 18th century.

Mitchell has competed in numerous competitions including one in Kentucky that he won. He competes in the advanced category.
“I am going to eventually one day, and not anytime soon because I am only 15, go to Japan where they have the biggest competition in the world – the Kendama World Cup,” Mitchell said. “It has a lot of prize money and the winner is put on TV there – you would basically be the world champion if you win that.”

The Global Kendama Network (Gloken) held the first Kendama World Cup in 2014 in Hatsukaichi, Japan, utilizing a new format whereby players choose five tricks from a list of 100 and attempt to complete tricks within a time limit. These tricks are classified according to difficulty into 10 different levels and the player receives points corresponding to the level of the completed trick i.e. a level 7 trick is worth 7 points but a more difficult level 10 trick is worth 10 points.
Mitchell is sponsored by a company – Sol – that would help him with travel to that meet.
At competitions they don’t care what kendama that you use as long as it is the right size. There are a lot of different brands of kendamas.
“They have a box that the kendama has to fit in and if it doesn’t, it can’t be used in the competition,” Mitchell added. “If it didn’t fit in that box it would be a jumbo size and it would be bigger than anybody else’s.”
He said it took awhile to be able to be sponsored by Sol but it was worth it now.
“I have repped them at competitions, posted videos using their products and they send me more products and different things for advertising,” Mitchell said.
For the beginner tricks you would have to be using the kendama a few months to understand how to do the tricks. 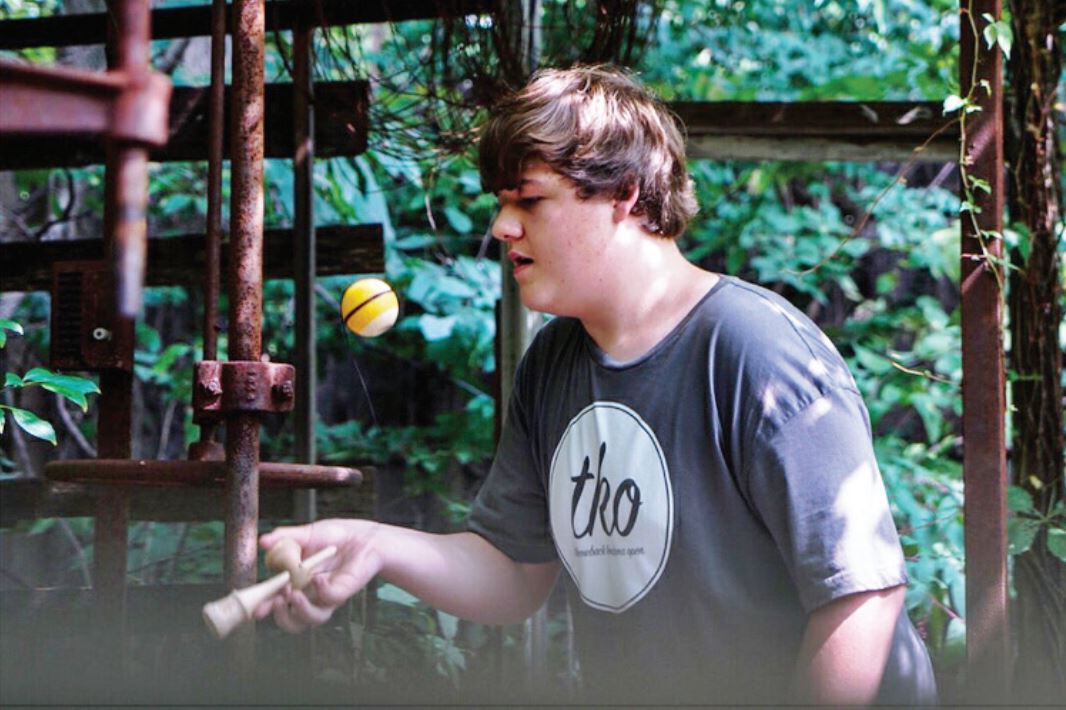 “For the advanced parts, you would at least have to be playing for about a year,” he explained. “It takes awhile to learn all the tricks correctly and get consistent with them.”
There are supposedly tens of thousands of trick variations. Different stances and grips are required to perform different tricks.
Some of the basic combinations are Around Perfecture; Around Japan; Around the World; Around Europe and Around USA.
Some of the other tricks are: Swing Spike, Flying V, Slipstick, Wrap it up B, Bird, Nightengale, Under Bird, Ken Flip, Earthturn, J-Stick, Juggle, Stuntplane, Downspike, Bird over the Valley, Swing Spike, Hand-Roll, Finger-Roll, Spacewalk, Arm Bounce, Knee Bounce, Handlestall, Trade Spike, Lazy Lighthouse, Cold Pizza, One turn Lighthouse, One Turn Airplane, Tornado, Air Whip, Drop Step, Swirl, Lunar, Mooncircle, Super Flamingo, Butterfly, Turntable, Gunslinger, Stilt, Root Canal and many, many more.

FAVORITE PART
Mitchell said the favorite part of his being involved in the kendama fun is meeting people from all around the world and some of his best friends he has met through the competitions.
“At the competitions they all support the same thing – it is all like everyone is friendly,” he added. “If you lost at a competition, people would tell you did a good job and are never mean about it.”
The competitions are very competitive. In the advanced group that Mitchell enters there are “a pretty good number of entrants.” All the companies have what is called their Pro Team and the professionals – members of the Pro Team – are competing in the advanced category, which Mitchell enters.
“There are at least 20 to 30 in the meets in the advanced category,” Mitchell said.
To be a good kendama player it takes patience and not giving up on stuff easily and its fun, he added.
“If you get you and your friends and family doing it and you all learn a bunch of tricks together,” Mitchell continued. “I guess that’s how I have learned a lot of stuff and that is how I learned a lot of stuff because I have always had family to play it with.”
He said all of his cousins play. Other than his family that play, Mitchell said he didn’t know many people that play except for some at school he has introduced the game to and they play.
“There are maybe seven people and I am trying to get more people to do it – there are not too many people around here that play.” 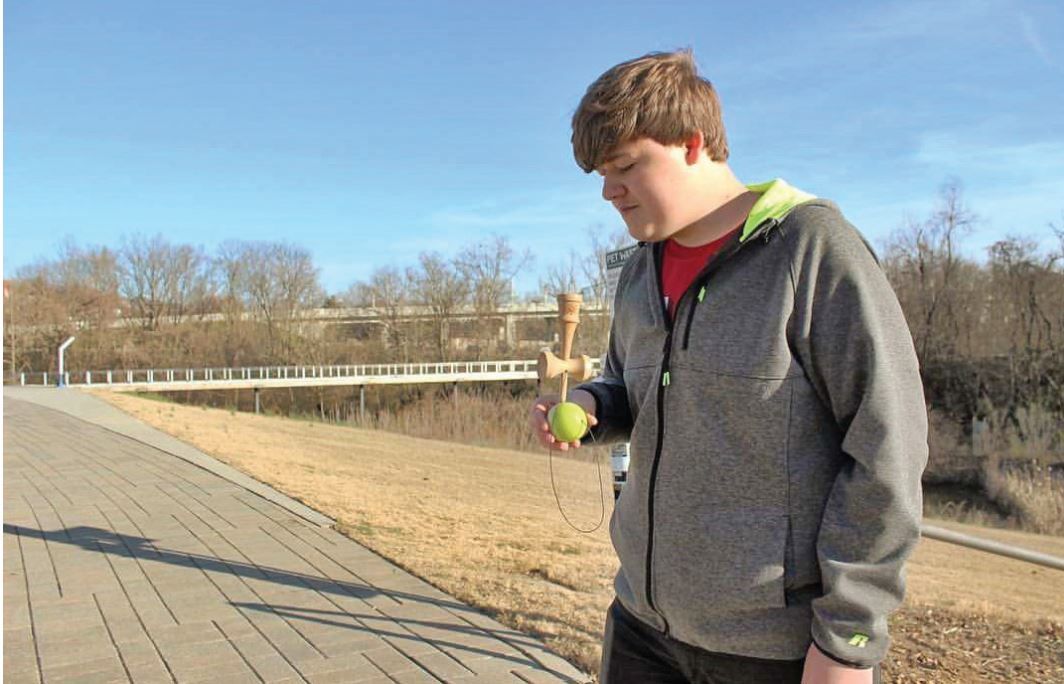 Asked what the hardest part about the kendama, Mitchell said that learning new tricks was the hardest.
“Certain tricks you have to have a good kendama to play with,” he explained. “Every kendama has its own shape. The cups can be a certain size and the cups being a little bigger can make it easier for certain tricks. So, depending on what kendama you use, will make the tricks easier or harder.”
Sol sends him a bunch of different kendamas so he has a lot of options to choose from in choosing which one he will use in a competition. “Depending on the tricks we have to do I will choose the one that does them better.”
Mitchell said he did not think that he was that far from being able to compete in Japan but his youth would be a drawback.
“Maybe when I am around 19.”

LAYMAN’S TERMS
ON THE KENDAMA
The CHS student explained in layman’s terms what a kendama is.
“The kendama is a piece of wood but it has three different sized cups and a handle that you hold it by,” Mitchell explained. “There is a string that hangs from the handle down to a ball and the ball has a hole in it. The object of the toy is to get the ball in the cups and with the ken (the handle that you hold it with) there is a spike and you have to put the ball on the spike. You say you spike it.”
Not only can you do the cups. You can go to the spike, which is lots harder than the cups.
“There are all kinds of things you can do with it that you wouldn’t think is possible with it,” Mitchell said.

PLAY
To play with a kendama, one holds the toy, and pulls the ball upward so that it may either be caught in one of the cups or land with the hole on the spike. More advanced tricks include sequential balances, juggles, and catches. There are 11 prescribed moves on the kendama trick list for achieving a kyu ranking and several more for a dan ranking. A 10-kyu rating (the lowest beginner grade) is attained by simply catching the ball in the largest cup. While most people play with kendamas for personal satisfaction, competitions do take place, especially in Japan, where many kendama shok?gekìs (Japanese for battle) are held. Participation in such competitions entails performing lists of tricks in sequence or completing particular tricks repeatedly for as long as possible. Additionally, tricks may be performed head to head with a rival to determine a winner. The first competitor to fail a trick loses, according to Wikipedia.
In the trick moshikame, the ball is juggled between the big cup and the smallest cup at the bottom repeatedly.