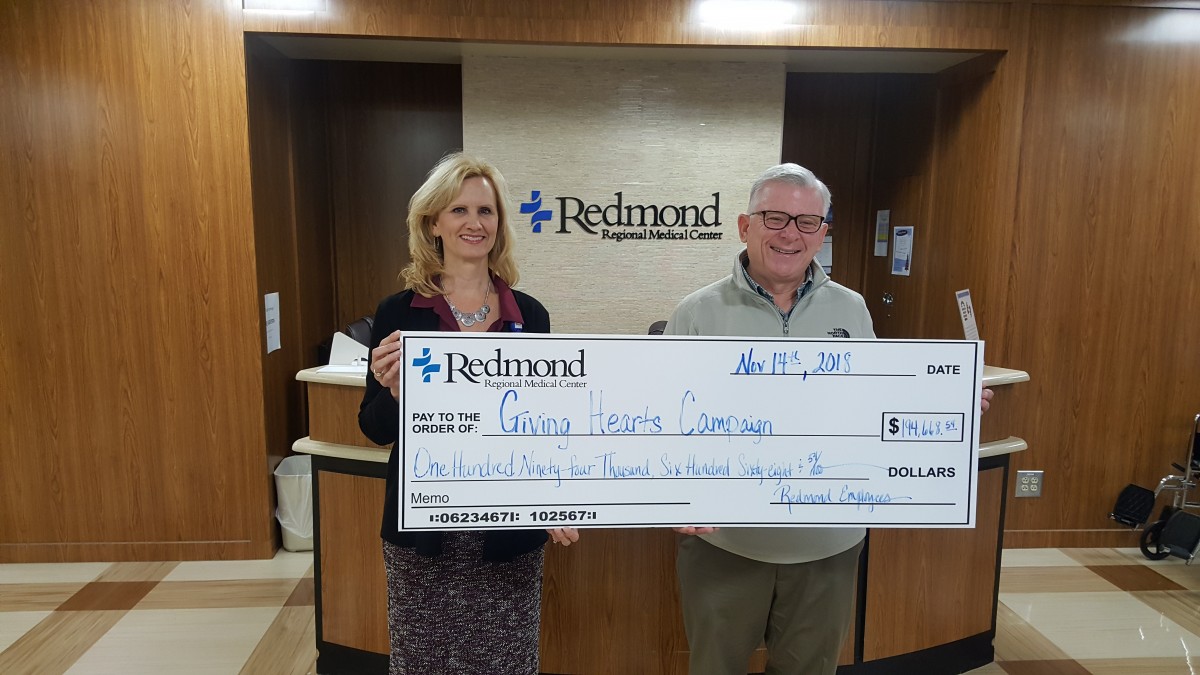 Rome, Georgia, November, 2018 – Redmond Regional Medical Center employees gave back to the community by participating in the hospital’s annual month-long campaign of charitable giving, the Giving Heart Campaign. Throughout the month of October, employees led an organized campaign of financial giving to non-profit organizations of their choosing. Employees were able to make a one-time donation or set up an automatic withdrawal from their paycheck. Through the leadership of this year’s campaign co-chairs, Ann Hook and Billy Murdock, over 560 employees participated in the campaign and raised a total of over $194,000.

For over 26 years, Redmond employees have celebrated a month-long campaign of charitable giving during the month of October. Throughout the years, this campaign has focused on giving back to the local community. In 2015, the campaign name changed to the Giving Heart Campaign to acknowledge Redmond’s commitment to heart care as well as caring for the community. “As the hospital Chaplain, I know the heart that our employees have for helping others,” said campaign co-chair Billy Murdock. “Every day at Redmond, I witness the amazing culture of giving and of giving back to the community that we serve. The level of support our employees have shown during this year’s campaign of giving has truly blown me away.”
The campaign kicked off in early October with an employee picnic. Representatives from a few local non-profit agencies were on hand to provide information to employees and to answer questions about their respective organizations. “There are so many great organizations in our community and each does amazing work meeting the needs of the individuals they serve,” said campaign co-chair Ann Hook. “I love that our team represents such a diverse group of interests and supports so many of our wonderful local charities. I am thrilled to be a part of an organization that cares so much for the community we serve.”
Through the Giving Heart Campaign, employees donated money to more than 75 different non-profit organizations, both local and national. Employees were able to choose the specific non-profit organizations they wanted to support. A few of the many local and national non-profit organizations chosen by employees include United Way, Open Door Home, Summit Quest, the Sweet Cocoon, Wounded Warriors, Doctors Without Borders, and the HOPE Fund.

To make an even greater impact, Redmond’s parent company, Hospital Corporation of America (HCA) once again contributed to this local campaign. For every eligible employee donation between $250 and $500, HCA matched the donation to the employee’s chosen charity. Funds from this matching program, combined with the charitable donations of the employees, helped Redmond employees raise a total of over $194,000. “There has always been a culture of giving at Redmond,” said Chief Executive Officer John Quinlivan. “It is especially important to us to give back to the communities we serve. Whether we are helping our friends and neighbors through a time of need or helping a family we’ve never met, I am inspired by the generosity of our employees. I am incredibly proud of our team and of our campaign co-chairs for their dedication to making this year’s campaign our most successful campaign ever.”