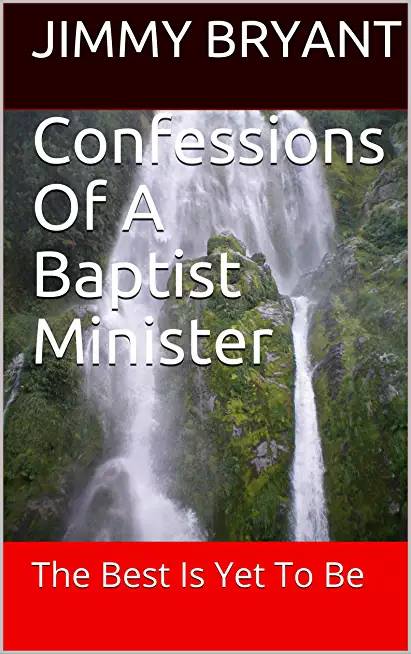 By GENE ESPY
Editor
Long-time Baptist pastor and former Summerville City Council member Jimmy Bryant has recently written a book of memoirs, “Confessions of a Baptist Minister – The Best Is Yet To Be.”
The book is out in ebook form and will soon be available in paperback.
He began writing the book “probably four years ago.”
He started the book then went back to woodworking and other things and quit writing on the book.
“I started back writing it seven or eight months ago,” Bryant said. “I had to redo all of that I did four years ago.”
He said writing the book has been somewhat of an ordeal.
I am not a writer by nature, he continued. My wife, Esther, has been trying to get me to write for several years.
“The book is a story about our life, the names have been changed to protect the innocent and not so innocent,” Bryant explained. “The book starts with Bryant’s birth in a sharecropper’s home and goes to virtually today.”
He said that he had been in the ministry for a little over 55 years and there was no way he could include everything you would want include in a book.
“It is some of the highlights of our life and how the Lord led us,” Bryant said.
It includes some of the churches they have served and some of the people in those churches with the names changed. Some of the people will recognize themselves and some of them won’t.
“Writing the book has been rewarding,” he added. “It has been a real trip for us.”
He had the manuscript edited by a lady in Boca Raton, Fla. Bryant said he felt if the book was worth reading it ought to be done close to right.
“It has turned out to be a little more expensive than I anticipated,” Bryant said. “I self-published it at her recommendation.”
She said that with a publisher, Bryant’s book would be a novella. The editor said that most writers with their first book, and it being short, would tend to self-publish and hopefully go from there.
“It has been out for two or three weeks on Kindle (ebooks) and is supposed to be out this week or next in paperback that will be available,” Bryant said.
He said that his choice for the title of the book was “Adventures and Misadventures of a Baptist Minister.” His editor advised me of the one we used, “Confessions of a Baptist Minister.”
Anyone that types in “Confessions of a Baptist Preacher” will get Joel Osteen’s book, according to Bryant.
“The book is sub-titled, “The Best Is Yet to Be,” he said. “The Lord has saved the best for last for us.”
Bryant said that not that many people know about his book being available, other than some of the people in the church.
“I’m not a Facebook person, but they advised me to get a page and get some friends and tell them and let it spread that way, also.”
He said that the book on religion, encouragement, motivation and all of those things, he thought came into play in the book.
“I would hope that somebody would read it and realize the challenge that we have enjoyed and would be challenged about by it themselves,” Bryant said. “It has just been rewarding by the number that said they have read it and it has been very encouraging.”
He said his preference for the cover of the paperback would be the same as on the ebook.
The book is available from Amazon by searching in Kindle ebooks for the title or Jimmy Bryant’s name or both.
Bryant said that he has found he had to get a copyright and I.S.B.N. numbers has slowed the paperback’s availability.
“I have really enjoyed writing because I don’t get to do much woodworking anymore, I can’t because of my back” he said. “I think that anybody that reads it will be encouraged by it.”
There is humor, good times, and sometimes not quite so good in Bryant’s book.
“We tried to stay on the positive side of everything, there is no sense in writing about stuff you would like to forget, or wish had never happened,” Bryant explained. “We tried to approach it from the high side instead of the low wide. That is what we have tried to do.”
According to Bryant, people may not be interested in their life per se, it is anybody’s – any preacher could have written this book, pretty much the way he did.
Bryant first moved to Summerville in May of 1979. His first church was South Summerville Baptist Church.