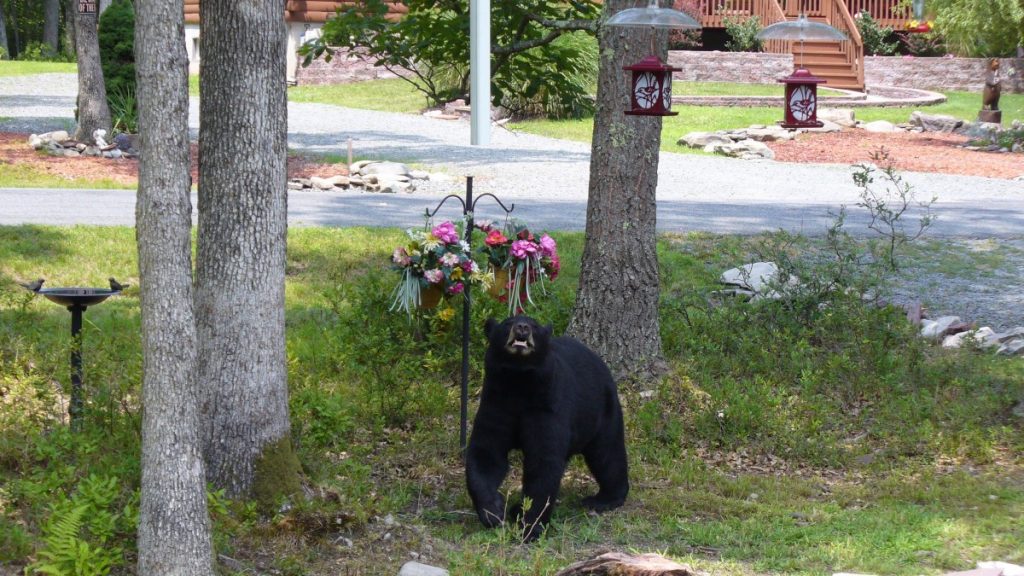 SOCIAL CIRCLE, Ga. (May 13, 2019) – Did you know that black bears rarely become aggressive when encountered by people? Human-bear encounters take place every day in Georgia, but the majority of reported situations involving bears can effectively be handled over the phone or by simply encouraging people to become BearWise, according to the Georgia Department of Natural Resources’ Wildlife Resources Division.
“Avoiding problems with bears is usually simple, though it may not always be convenient,” says Adam Hammond, WRD’s state bear biologist. “One of the six BearWise Basics is about securing food, garbage and recycling. When bears have access to human-provided foods, regardless of the source or the intent, they will take advantage of them and that often leads to further problems.”
So, why is it such a big deal? A bear that repeatedly finds food from garbage cans, bird feeders, and pet food bowls is unlikely to leave, and will become bolder in its search for easy food. This can lead to potential property damage of homes, garages, vehicles and more. Once bears have learned bad habits and have come to rely on people for a “free meal,” they never change those behaviors and nuisance bear behavior progressively gets worse with time and experience. If you really care about bears, please make the extra effort to ensure that your home and yard are “unattractive” to bears – to protect yourself, your family and pets, and bears.
BearWise is an education program developed by bear biologists from each of the 15 state wildlife agencies that make up the Southeastern Association of Fish and Wildlife Agencies (SEAFWA). The program, anchored by the website www.bearwise.org, offers citizens specific, detailed, and high-quality information to help people live responsibly with bears and to keep bears wild. Check out the BearWise website and learn more about how to respond to specific types of bear encounters and more about the Six BearWise Basics.
The black bear is a symbol of Georgia’s natural diversity, the only bear found in the state and a conservation success story. Though now considered the most common bear in North America, the species was nearly eradicated from Georgia in the 1930s due to unregulated market hunting, illegal harvest – including the killing of bears as “vermin,” and large-scale habitat loss. Sound wildlife management practices have restored Georgia’s black bears to a thriving population estimated at 4,100 bears statewide.
Black bears may legally be hunted during the season, which occurs each fall in Georgia in certain areas (www.georgiawildlife.com/hunting/regulations). However, the taking of bears during any other time of the year or the taking of bears illegally during the hunting season is called poaching. Prevent poaching of bears by reporting any illegal activity. Information can be reported by email, phone or in person. Visit http://gadnrle.org/ranger-hotline for details.
For more information on how to live responsibly with bears, visit www.bearwise.org.