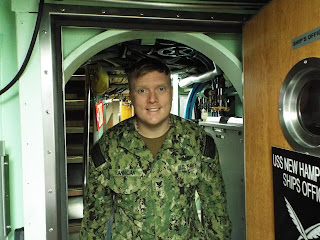 As an Information System Technician (Submarine), Flannigan is responsible for computer network system administration, which is essential for the day to day operations of the submarine.

“I joined the Navy because I wanted to serve my country and do my part,” said Flannigan.

As the most modern and sophisticated attack submarine in the world, it can operate in both littoral and deep ocean environments and presents combatant commanders with a broad and unique range of operational capabilities.

“I support my boat’s mission in maintaining the non-tactical data processing network as well as supporting the ship’s self-defense force and the forward duty section in port watches,” said Flannigan.

The submarine is 362 feet long and 32 feet wide and weighs nearly 7,800 tons, powered by a nuclear reactor to push the boat through water at speeds of more than 30 knots while submerged.

“My favorite part about what I do is maintaining the network because it’s fascinating how it works and I am constantly learning,” said Flannigan.

As one of 134 crew members aboard the submarine, Flannigan and other Sailors are building a legacy that will last beyond their lifetimes. Crew members know how important it is for the Navy to develop new war fighting capabilities to continue their success on the world’s oceans.

“My proudest accomplishments are winning Blue Jacket of the Year and earning my ‘dolphins’—the submarine qualification,” said Flannigan.