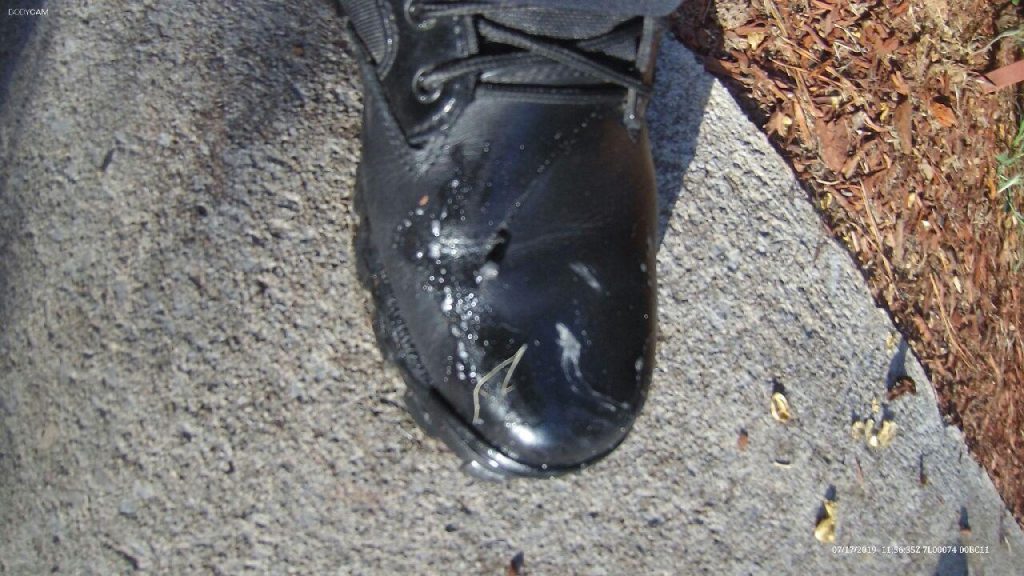 Photo shows where a large white dog bit a Summerville Police Officer’s boot. Officer fired one round killing the dog.

The number of dog bite victims continues to grow in Chattooga County, including one situation where a cop shot and killed a canine on Wednesday morning.
This week two people were added to the list of dog bite victims –22 so far this year.
Terry Byrge, of Fourth Street, in Summerville, said a large black dog attacked and bit him on the right leg while he was riding a bicycle on Hawkins Drive on Wednesday morning.
“Byrge advised that the dog has attempted to bite him in the past when riding his bike in the area. . .” Summerville Police Officer Ricky Van Pelt reported. “Byrge did have a few fresh scratches but no puncture wounds were noticed and he refused medical attention and was advised to get medical attention as soon as possible.”
Animal control was contacted about the incident.
A Summerville cop shot and killed a “white boxer/pit bulldog mix,” as it attacked Wednesday morning, according to a police report.
The incident started around 7:25 a.m. when Tonia Johnson, of Summerville, called 911 about a dog.
“Upon arrived I met with Tonia Johnson who was clearly very emotional and still upset,” Officer Matt Pritchard stated.
During a morning walk along Highland Avenue, a white dog charged after

her. Johnson was familiar with this dog because she passes it during her morning walks, according to police reports.
Wednesday her walk was different. The dog charged and tried biting her. She retreated into the roadway and was almost struck by a passing vehicle, she told Officer Pritchard.
After talking with Johnson, Pritchard went to the house where the dog resides on Highland.
“When I got out of my patrol vehicle, I was immediately charged by a dog matching that description. I yelled at the dog and the animal stopped and continued to growl. It then charged me once again and I used [pepper spray] on the dog which then ran into the patio area of the residence,” Officer Pritchard stated.
The officer continued to the front door and knocked where the homeowner greeted him.
As he was telling the homeowner about the complaint, the dog ran from around the house and tried attacking again.
“The animal did place me in fear of immediate bodily harm at this time,” the officer said.
The homeowner stepped into the yard and got between the dog and the officer.
“He’s not acting right, something is wrong with him,” the homeowner told the officer.
Instead of going into the house as directed by the homeowner, the dog took a wide run around her and came after the officer, according to a police report.
“In one motion the dog jumped and bit my foot as I kicked the animal and fired one round into the dog stopping the threat,” Officer Pritchard stated.
The dog died in the front yard.
This is the second person the dog bit, according to police reports.
“After further investigation into dog complaints at this address, I did locate a previous incident report . . .in reference to a dog bite at this location where the victim was transported by EMS for treatment,” Officer Pritchard stated.