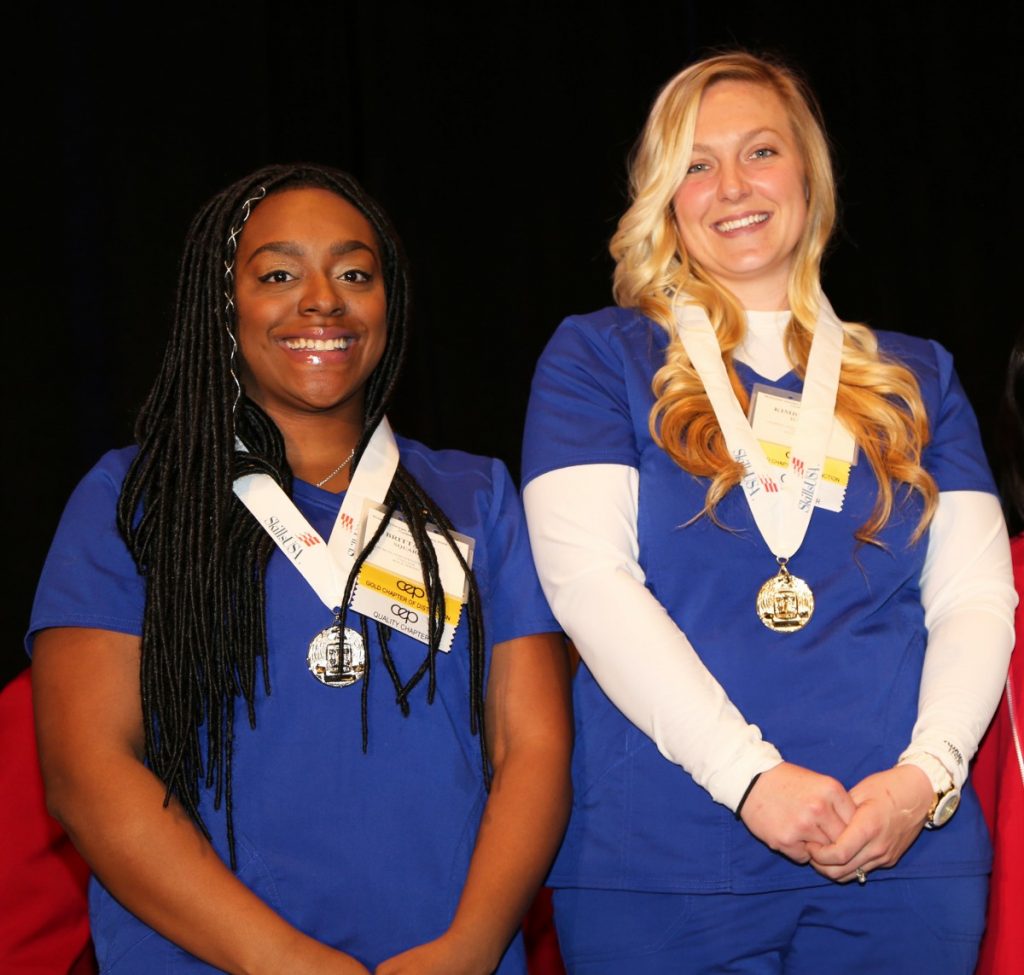 Georgia Northwestern Technical College Practical Nursing students Kimberlee Autumn Hall and Brittany Square made GNTC history when they won the gold and silver medal at SkillsUSA Georgia and Hall went on to win the bronze medal at SkillsUSA’s National Leadership and Skills Conference.
Both students had to overcome many obstacles along the way and became best friends while completing the Practical Nursing program on GNTC’s Floyd County Campus in Rome.
“We met in school when we started here but it was like an instant connection,” said Hall, a resident of Plainville. “We are extremely alike and Brittany has turned into my absolute best friend.”
At the age of 15, Hall had to leave home with her sister Shiloh, who was two at the time.
“Both my mother and father were on drugs and I moved out, helped raise my little sister and I had to quit school and everything,” said Hall.
According to Hall, after the birth of her children BrantLee and Kimber

something kind of clicked that made her want to continue her education.
“I decided that I was going back to school so I got my GED® diploma, my CNA certification and then I enrolled into GNTC’s Practical Nursing program,” said Hall, a resident of Stockbridge. “It’s been hard because my husband Brandon works night shift.”
Hall said that winning the gold medal in SkillsUSA Georgia and the bronze medal in SkillsUSA’s national competition was an amazing experience, but she couldn’t have done it without Square.
”We had the opportunity to do SkillsUSA Georgia and I didn’t want to do it at first and Brittany made me do it,” said Hall. “At the competition, when they called my name out as the winner of the gold medal I didn’t even realize it because I was so distracted and excited that Brittany had won the silver medal.”
Square was in nursing clinicals when she received a call from her husband that they had been evicted from their home in Cartersville and he was moving things out.
“We had some payments that were not coming in on time and it kind of put us into a hole,” said Square. “We stayed at a hotel for about a week and then we transitioned to a friend’s house for a little while.”
Her husband Ronnie had worked at Hays State Prison in Trion and was looking to move into becoming a police officer. He ended up landing at the Clay County Police Department and then they saved up their money and moved to Stockbridge, which is south of Atlanta.
This meant that Square’s daily commute was suddenly much longer. She also had to take her kids to daycare and be at her clinical site before 6:45 a.m.
“With Atlanta traffic it sometimes takes about two and a half hours to get to GNTC,” said Square. “I have to wake up Mia and Tristan sometimes at 3 a.m. or 4 a.m. just to get us on the road on time.”
At the end of the day she would have to pick up her children at 5 p.m. and make the trip back to Stockton.
“Sometimes it would take four hours to get home because of the Atlanta traffic,” said Square.
According to Square, the instructors and friends she made at GNTC helped her to navigate the difficult times.
“I stayed with Kimberlee a few nights just so I wouldn’t have to get up so early the first few times,” said Square. “Mrs. Pauley also has reached out and made connections to make sure that I had what I need so I can focus on my studies.”
Square said that she and Kimberlee were both excited for each other at SkillsUSA Georgia.
“We were the only two students to come from GNTC representing Practical Nursing at SkillsUSA Georgia,” said Square. “When they called my name I was shocked and when they called her name I just knew that it was just the best moment ever.”
“SkillsUSA was phenomenal for us because it gave us the break we needed and it allowed us to re-affirm what we wanted to do with our lives,” continued Square.
Hall says that her father is back in her and her family’s life now.
“My Dad is back home, he’s on rehabilitation and so we are doing it together,” said Hall. “We are making a slow transition back to him parenting.”
She said that many of the challenges that she faced was her motivation to keep going.
“It was extremely hard but if the life that I come from has taught me nothing else it is that is doesn’t matter what you come from you can build your own and make better,” said Hall. “Instead of taking what I came from and making it my excuse why I couldn’t do anything. It was my excuse why I’m never going to fall back.”
Square said that it has been hard and an emotional ride for her, but in the end it was very rewarding.
“The instructors here make a connection with their students, they love you like family and they want to see you succeed,” said Square. “I’m looking forward to taking the exit exam and being with my best friends, my family that I’ve made here and seeing what the future holds for me.”
Suzanne Pauley, director of Practical Nursing at GNTC, said that Kimberlee and Brittany’s perseverance is why they overcame so many obstacles in their path.
“I am so proud of them,” said Pauley. “I take pride in knowing what I taught was beneficial not only in their success with SkillsUSA, but most importantly in their career.”
Georgia Northwestern Technical College (GNTC) provides quality workforce education to the citizens of Northwest Georgia. Students have the opportunity to earn an associate degree, diploma, or a certificate in business, health, industrial, or public service career paths. This past year, 12,785 people benefited from GNTC’s credit and noncredit programs. With an annual credit enrollment of 7,499 students, GNTC is the largest college in Northwest Georgia. GNTC has an additional enrollment of 5,286 people through adult education, continuing education, business and industry training, and Georgia Quick Start. For more information about GNTC, visit us at www.GNTC.edu. GNTC is a unit of the Technical College System of Georgia and an Equal Opportunity Institution.