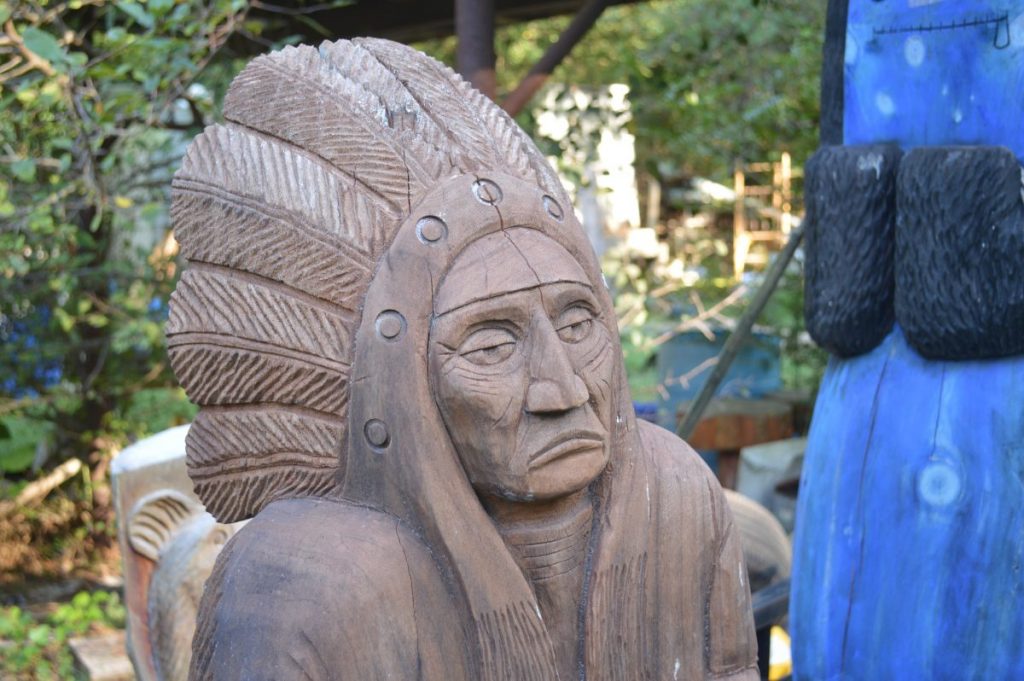 By GENE ESPY
Editor
Mountain View resident John Martin really enjoys his hobby of carving with a chain saw when he can get the time to do it.
Martin has been carving for 20 years and still loves doing his artwork and makes a little money on the side as well. “If I charged by the hour, there’s no telling how expensive they would be,” Martin said, something heard from a lot of artists. Instead, he charges an amount that his customers don’t mind paying.
“Carving is a stress relief and is something I really enjoy doing,” he added.
Martin got started by watching Jim Marbutt doing artwork with a chain saw.
“From then on after seeing him, I knew when I saw him, I wanted to do it,” Martin said.
He said he does mostly chain saw carving now and other types as well.
“I have done pretty much a lot of animals and Indians since I began carving,” Martin said. “Mostly animals and human faces.”
Asked how many carvings he has done in his 20 years of carving, Martin said, “Thousands.”
He sells his work by word of mouth and since he knows a few people and every once in a while somebody will come by his house and stop and buy one of his pieces of artwork.
He had two bears that he carved that were on posts on his front porc

h. They looked like they were crawling up the post or just hanging there. One person stopped and wanted to buy one of them and Martin sold it to them.
Many times, he loads some of his carvings up on a trailer behind his truck and he goes and sits somewhere on the side of the road or sells them on a store parking lot.
“I don’t really have problems selling them, people seem to like them,” Martin said.
He uses all types of woods in his carvings. Some are better than others.
“I like cedar the best,” he added. “I like the looks of it and the smell of it.”
A six-foot bear carving would usually take Martin two or three days to finish if he were able to work on it all day.
He is a plumber in his day job.
“Since I do it part-time, it takes me a couple of weeks to get one,” Martin added. “Some carvings, like Indians, I work on them sometimes for a month or more before I finish one.”
He usually has a lot of projects going on at the same time, instead of one at a time.
In an area where he does some of his work, he had his trailer with some of his carvings on it strapped down to take to sell. There were several bears and an Indian. One of the bears was about six or seven feet tall with a hat on and overalls. An Indian was also on the trailer with some very good detail on his face. 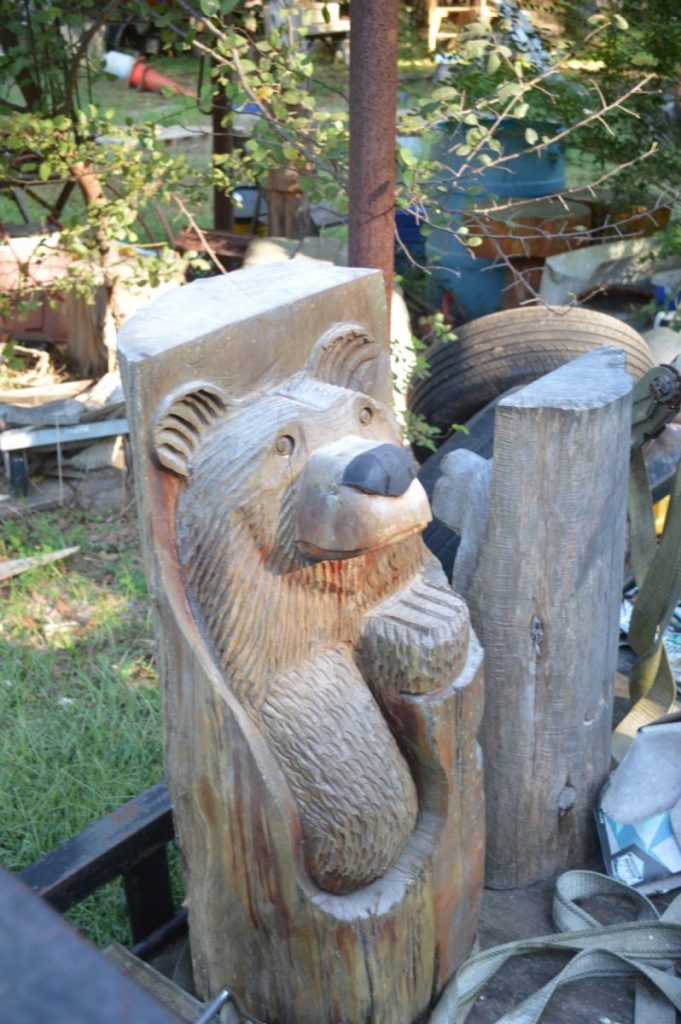 Also, in the area was a bear that had a cane pole and looking like he was fishing. Other carvings in various degrees of readiness were laying around waiting for the finishing touches. He also had a big carved frog painted green that he showed the photographer.
Asked how he saw the different animals and Indians in a piece of wood before he began carving, Martin said he didn’t really know.
“You would hear the same thing from most any carver, it is already there in the wood and you take away everything that doesn’t look like a bear,” he said. “I don’t really know how to explain it.”
In another area he had other carvings in different degrees of readiness.
There were bears with welcomes on them for front porches, bears out of different kinds of woods and a variety of other kinds and sizes of bears. An owl sitting on a branch was also ready to be finished.
“I am just starting back this week carving, I have a few commission pieces to do,” he said. “They have been waiting on me for a long time.”
He said he has not had time to carve the last few months and has sold a lot of his inventory and didn’t have as many items ready as he usually has.

HUMMINGBIRDS
Sitting on Martin’s front porch, he had 15 hummingbird feeders with dozens of hummingbirds buzzing around tasting the different feeders on the front of his house.
At times he says there are probably 150 hummingbirds flying around at certain times.
He fills up the feeders every evening and probably makes two gallons of the sugar water every day.
“There are times there are birds sitting at every port on every feeder at one time,” Martin continued.
He said that it was almost time for the hummingbirds to leave and they seemed to leave all at the same time. 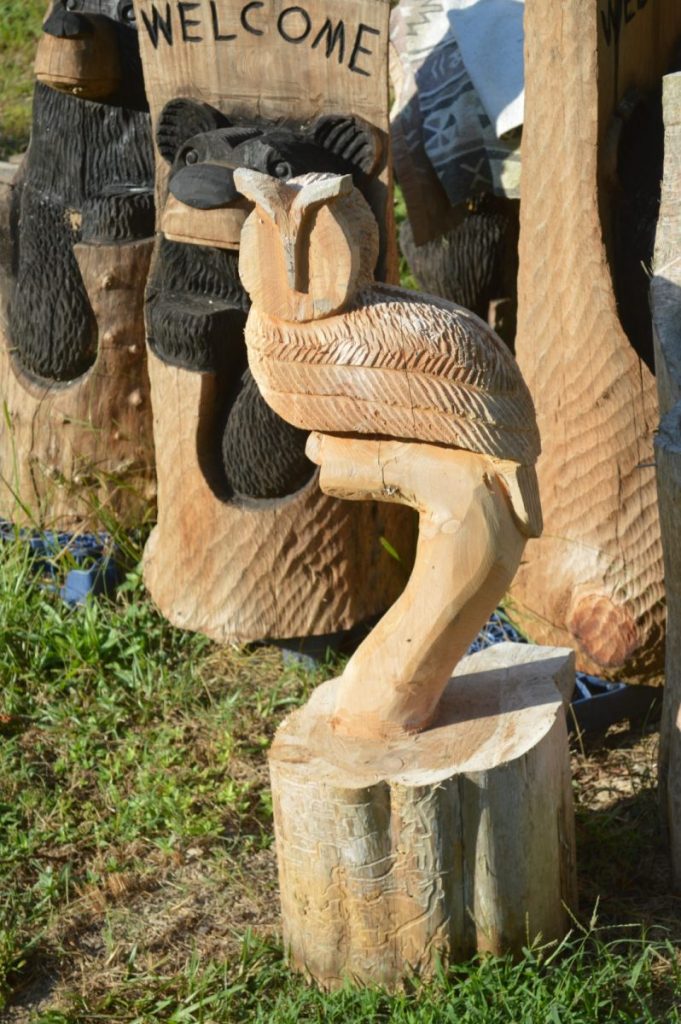 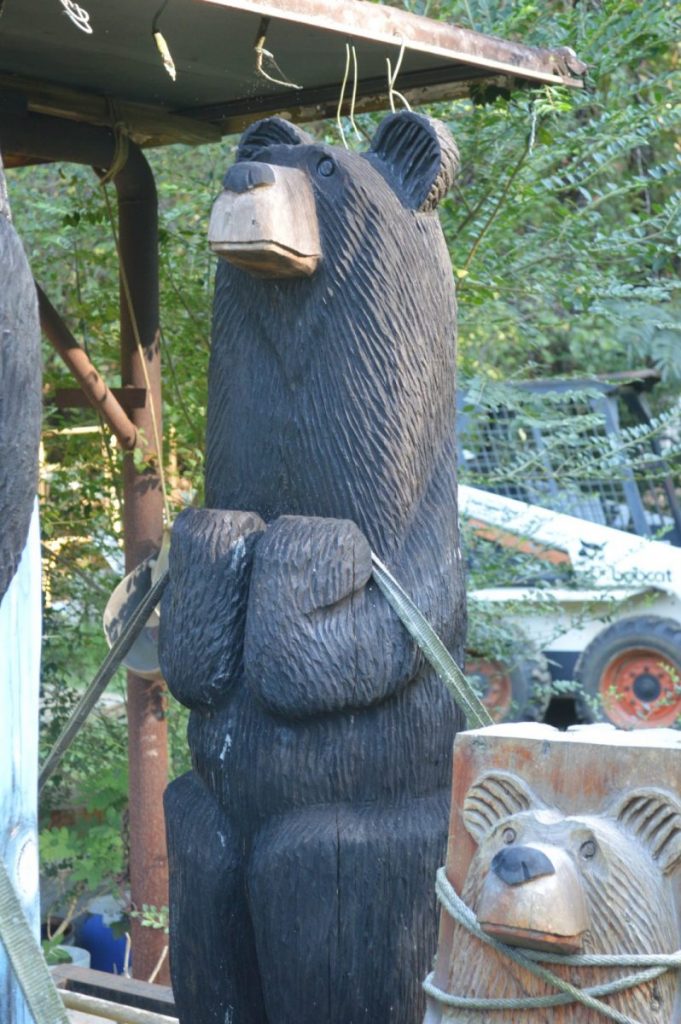 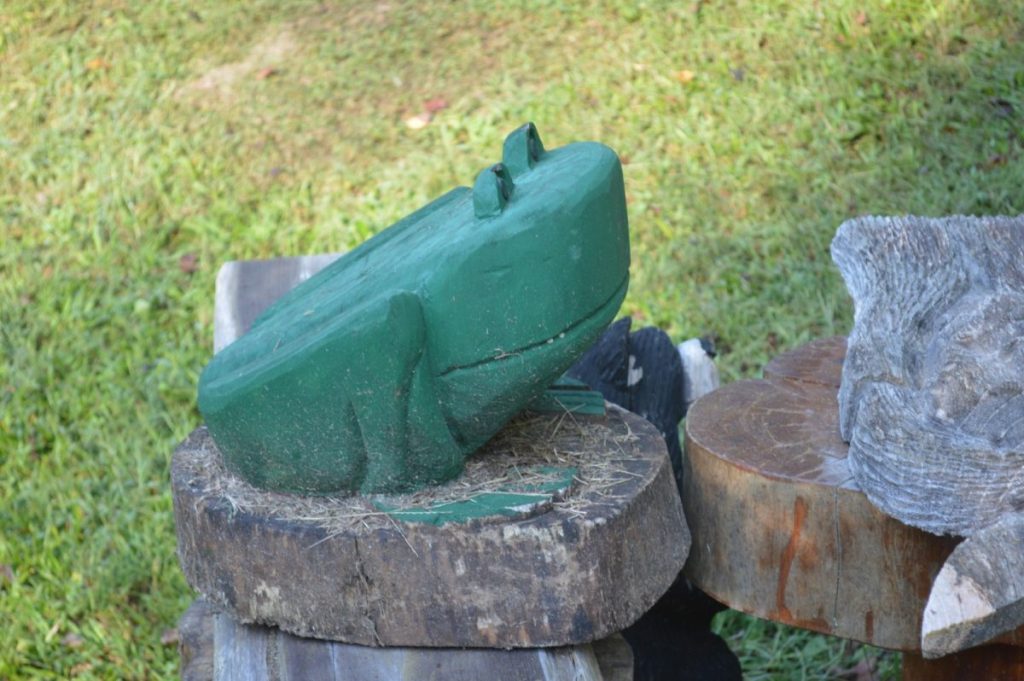