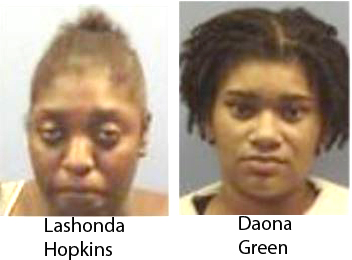 tsville woman allegedly shoved numerous plastic bags containing methamphetamine inside her own body cavities to conceal them from cops, according to Summerville Police reports.

Officer Jo Stricklin was checking for speeders on Hwy. 48 when a red Ford Flex came by too fast around 1:40 a.m. Sunday, according to a police report. The officer stopped the vehicle on the CVS Pharmacy parking lot and immediately noticed an open Coors Light can in the center console as he approached.

“Daona Green stated that she was from Huntsville en route to Atlanta to pick up her uncle and bring him back home. I advised the subjects that they could not have an open container in a vehicle and then asked if the driver had been drinking because I could smell alcohol coming from her person,” Officer Stricklin stated.

Green denied drinking and the officer then said he was going to search the vehicle for illegal items.

“I then noticed the passenger of the vehicle, later identified as Lashanda Hopkins, moving around in a very frantic manner,” Officer Stricklin stated.

After placing Green and Hopkins in separate patrol vehicles, officers found a small clear plastic bag of suspected meth, brass knuckles and $300 in cash inside the vehicle.  When the officers went to confront Hopkins, they opened the patrol car door and found her sitting with her pants down. She told officers that her pants “fell down,” according to an incident report.

“Officer Lebron Jackson advised that when he placed her in the patrol unit, her pants were up,

Hopkins claims she knew nothing about the drugs in Green’s vehicle. She also denied pulling her pants down to hide contraband from officers. As officers continued to talk with Hopkins, they found two meth pipes –one stuffed under the patrol car seat and one in the door jamb.

“White powder was also found all over the floorboard and seat area around Ms. Hopkins,” Officer Stricklin said.

Officers warned Hopkins that if she went inside the jail with drugs that she would face additional felony charges.  Hopkins claimed she had no other drugs.

“Based on Ms. Green’s admission of having the pipe in the vehicle and Ms. Hopkins’ movements when I removed Ms. Green for questioning in addition to recovering suspected methamphetamine from the vehicle, it is believed that Ms. Green did intend to assist Ms. Hopkins to distribute the additional suspected methamphetamine. The cash, vehicle and cell phones were taken into evidence and turned over to investigations,” Officer Stricklin stated.