INVASIVE SPECIES FOUND IN GEORGIA: NORTHERN SNAKEHEAD CONFIRMED IN GWINNETT COUNTY
SOCIAL CIRCLE, Ga. (October 8, 2019) – In early October, an angler reported catching a northern snakehead, an aquatic invasive species, in a pond located on private property in Gwinnett County, according to the Georgia Department of Natural Resources’ Wildlife Resources Division (WRD). This is the first time this fish species has been confirmed in Georgia waters.
“Our first line of defense in the fight against aquatic invasive species, such as the northern snakehead, are our anglers,” said Matt Thomas, Chief of Fisheries for the Wildlife Resources Division. “Thanks to the quick report by an angler, our staff was able to investigate and confirm the presence of this species in this water body. We are now taking steps to determine if they have spread from this water body and, hopefully, keep it from spreading to other Georgia waters.”
Snakeheads have been reported in 14 states in the United States, however, this is the first confirmed report from Georgia. The snakehead is a long, thin fish, similar in appearance to the native bowfin. They can get up to three feet in length. They have a long dorsal fin that runs along their whole back, and have a dark brown blotchy appearance. They can breathe air, and can survive in low oxygenated systems.
Invasive species are often introduced through unauthorized release. Non-native invasive species such as the northern snakehead, have the potential to impact native species in introduced areas by competing for food and habitat. In Georgia, it is unlawful to import, transport, sell, transfer, or possess any species of snakehead fish without a valid wild animal license.
Here’s how anglers can help:
· Learn how to identify northern snakehead.
· Dispose of aquarium animals and plants in the garbage, not in waterbodies.
· Dispose of all bait in trash cans, at disposal stations, or above the waterline on dry land.
· Dump water from boat compartments, bait buckets, and live wells on dry land.
If you believe you have caught a northern snakehead:
· DO NOT RELEASE IT.
· Kill it immediately (remember, it can survive on land) and freeze it.
· If possible, take pictures of the fish, including close ups of its mouth, fins and tail.
· Note where it was caught (waterbody, landmarks or GPS coordinates).
· Report it to your regional Georgia DNR Wildlife Resources Division Fisheries Office (https://georgiawildlife.com/about/contact#fish)
For more information about the northern snakehead, or other aquatic nuisance species, visit https://georgiawildlife.com/aquatic-nuisance-species. 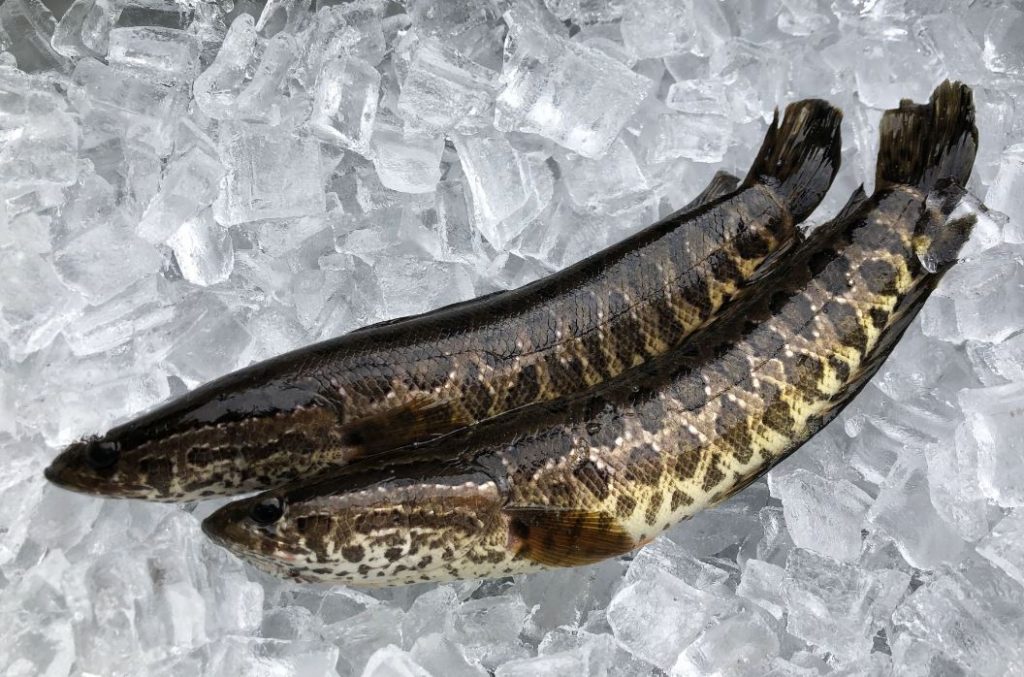