Recently Spencer Hogg, a Chattooga native, was appointed as a project manager with the Northwest Georgia Joint Development Authority, which Chattooga is one of the four-member counties.
“The biggest benefit to the JDA is cost-sharing and marketing,” Hogg told club members. “We are able to travel to different conferences in different places in the country and different places in the state to site selection conferences and really market all of the glorious counties we have in Northwest Georgia.”
The Joint Development Authority covers Dade, Chattooga, Walker and Catoosa counties.
Hogg said that Commissioner Jason Winters was extremely aggressive when it comes to economic development and searching for prospects.
“When we have a prospect, he is fantastic in working with them to make sure that we have the most attractive place to do business,” Hogg added.
He said that one thing they are fortunate about are the four counties that make up the JDA is that all four tiers of the system are represented in the four counties. Chattooga is a Tier One county; Walker County is Tier Two county; Dade is a Tier Three county and Catoosa is a Tier Four county. 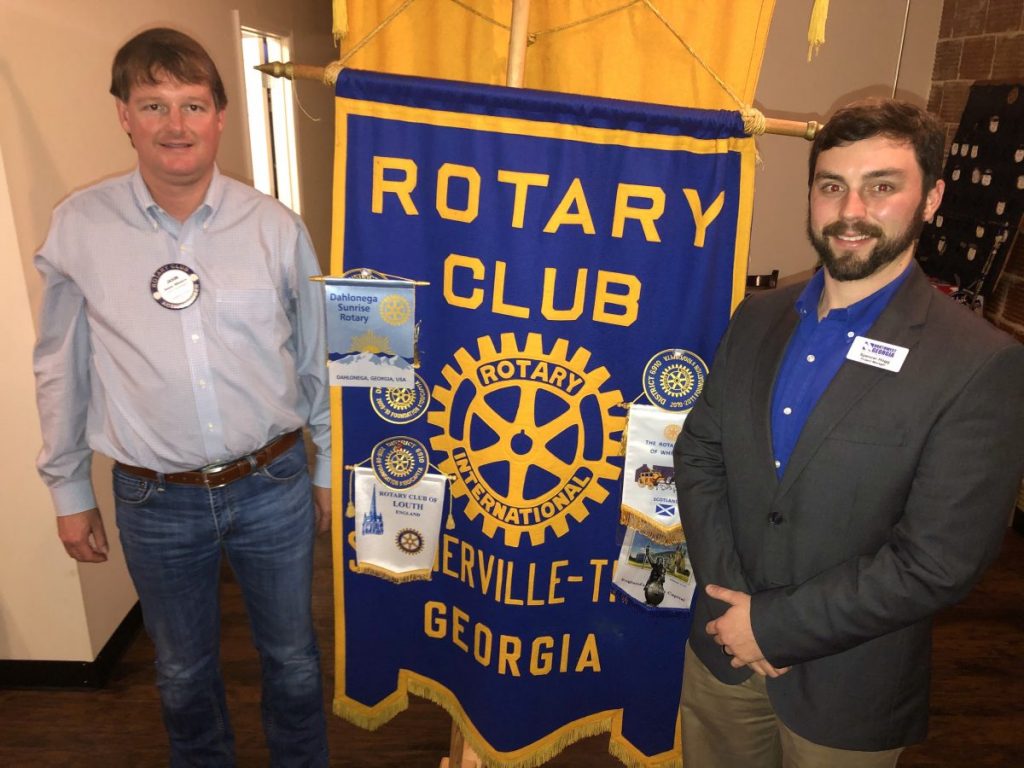 “Because of that, very rarely do they compete for the same projects,” he said. “And because of that, we are able to sell a four-county workforce to these companies and they really appreciate that.”
The JDA also has the GIS WebTech technology on its website. One thing that technology does is allow them to list properties in the four counties and to market them.
The biggest advantage to that is cost-saving for the county, Hogg explained.
“The JDA pays for that, we do the technical work for that site and try to get site information from the county commissioners to make sure we have that up to date,” he added.
Right now, 75 percent of businesses’ site selection takes place online.
Economic development used to be they would call you and talk to you about a property and now they want everything so they can print it out and compare properties and then follow up with you after that.
“We try to keep that very well-maintained,” Hogg added.
The regional approach to cost-sharing another big money-saver and advantage for the JDA is it is a member of the Greater Chattanooga Economic Membership, he continued. Instead of individual counties having to join that, the JDA pays a single fee to join. That gives them access to Chattanooga request for information and Chattanooga projects which saves money for the counties, which most counties do not have access to that.
“We are very blessed to tap into the Chattanooga market and we work very closely with the Chattanooga Chamber as well and we also work very closely with all of our local chambers, also,” Hogg said.
The JDA also hosts networking events to try to give county officials, city officials and site selectors prospects in the same room.
The JDA also tries to help on the grant side.
“When a community applies for a grant, we are happy to give support and are happy to help with the grant application process,” he continued. “We actually have a lady in our office who can help.”
A Tier One county automatically has a $3,500 per job tax credit. He gave an example of the way the Tier One status helps the industry by illustrating Mohawk’s expansion in Chattooga County.
“Just in JDA benefits, with 500 jobs over five years, that was $1.25-million, that JDA was able to help facilitate and save Mohawk in its expansion here,” Hogg explained.
He said the JDA is one of the few in Georgia that are staffed.
Hogg added that that they are trying to venture into the Tourism Development Act.
“We are working with our partners to try to grow tourism here,” he added. “And continue to try to grow industry here.”
Hogg said that Chattooga County already had a couple of industries they were helping to expand, and they are working hard on that.
‘We are just trying to keep the ball rolling right now,” he added.
The unemployment rate has just come out and the four-county region and it was 2.9 percent and that is “just fantastic,” Hogg added.
He said that Chattooga County was fortunate with the Trion industrial Park which still has a “ton of acreage still available.”
Dade’s industrial park is essentially full. They are looking to acquire more space.
Walker County still has some space available in one of their industrial parks.
Catoosa is full and looking to acquire new property.
“Trion’s Industrial Park is very attractive for this area,” Hogg said.