(EDITOR’S NOTE: The following is the first in a series of articles about houses in Chattooga County.) 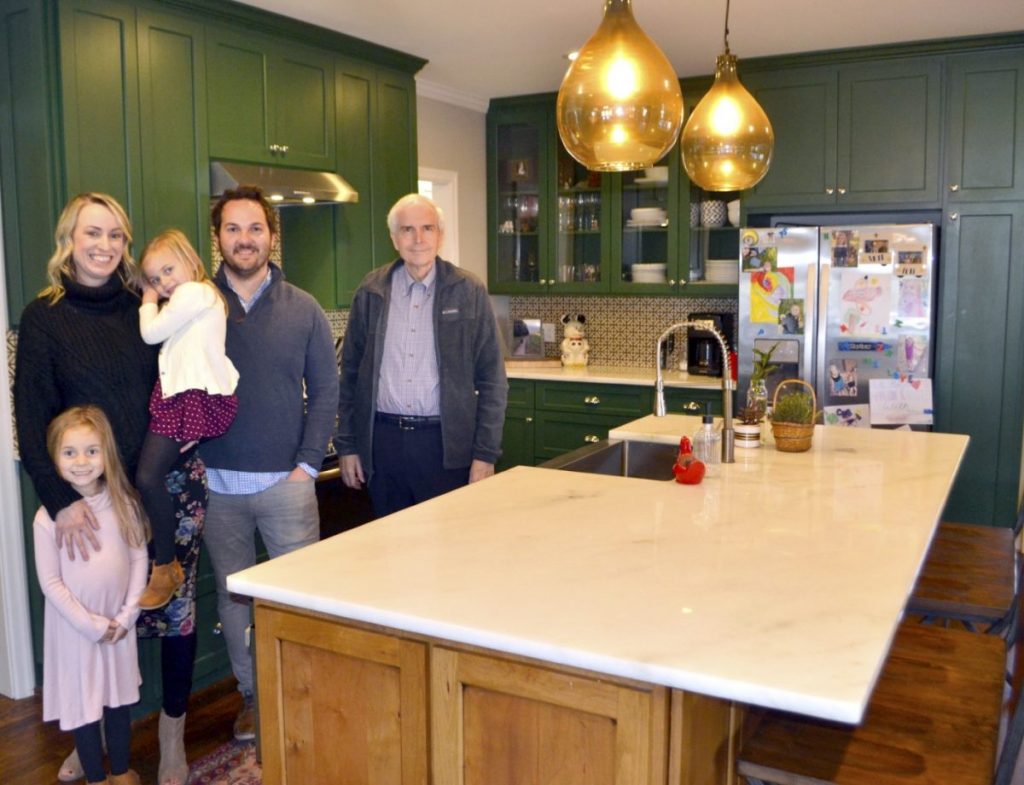 Ashley and Carl Kielborn and children with Eugene McGinnis, right.

A local real estate agent never expected a business deal would turn into her family home.
Ashley and Carl Kielborn were looking for a real estate investment. They wanted to purchase a Summerville house that’s under market value, renovate it and then sell it for a profit.
They thought 185 Georgia Avenue was their money-maker. Instead, it’s charm, size and historical significance captured their hearts.
“I just fell in love with the house. I thought I was going to flip it,” Ashley, who is an insurance broker and real estate agent, said.
The house was in foreclosure when Ashley spotted it and then showed it to her husband. It was cluttered and the home needed renovating when Carl first looked at it. He was a little hesitant at first but trusted his wife’s real estate instinct.
The house was a foreclosure held by BB&T Bank. Ashley made a pre-emptive cash offer before the house went on the market. The bank turned her down, however.
She tried again weeks later with success. In February 2017, the bank agreed to sell and even gave them a better deal for the 3,874 square-foot home.
“It makes me very happy to see the home loved and taken care of,” Summerville Pharmacist Eugene McGinnis said.
He’s fond of the house and knows exactly how it will be a great place for the Kielborns to raise their two daughters. McGinnis spent the first 30 years of his life at that house.
Before the Kielborns bought the home, everyone called it the McGinnis house.
It was constructed in 1951, the year before McGinnis was born.
His mother and father, Harry and Edythe, purchased the corner lot of Georgia Avenue and Union Street several years prior. A 1,700 square-foot house stood on th 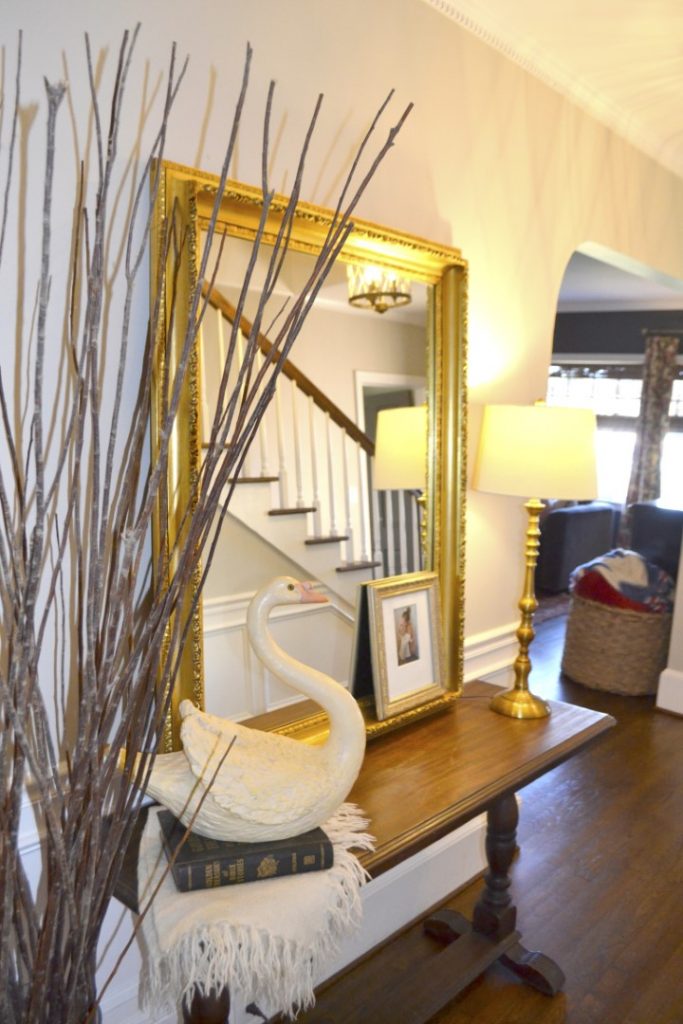 Mirror has been in this house for more than 50 years. Was part of the McGinnis estate.

at property until the McGinnis family had it moved to an adjacent property on the northwest corner on Georgia Avenue.
After the old home was relocated (and still stands next door), the McGinnis family started building their new home. It was intentionally built at that location so that his father could be near his drug store next to the courthouse.
“My daddy did not want to be too far from the drug store,” McGinnis said.
The new house was a boom. Georgia Power Inc., featured Edythe’s kitchen in one of their publications and pointed out the all-electric appliances as being state of the art.
McGinnis doesn’t know why his parents built such a large home.
“They didn’t know I was coming along when it was built,” McGinnis said.
McGinnis has an older sister, but that wouldn’t fill the five-bedroom, three-and-a-half bath house. Edythe’s mother was also alive at the time of construction and one upstairs room was earmarked for her.
“They planned one room upstarts for Granny Hamner,” McGinnis said.
But the grandmother died of a stroke as the family was transitioning into the home.
The house was a big hit for the community. Edythe, a home economics teacher, invited people into her home.
A room off to the right of the main entrance was used as a dressing room for brides on their wedding day. Summerville First Baptist Church is across the road and brides would come over to the house and change.
“They were usually former students of hers,” McGinnis said.
Along with the weddings came photographs. The house and landscaping were used as a backdrop by many taking pictures, according to McGinnis.
The house did not change much over the years. The Kielborns have removed a couple of walls and brought their own renovations. But the core of the house has remained relatively stable.
Some of the updates, for example, were driven by technological advances. The Kielborns turned a small telephone nook in a hallway into a nook that holds the family’s router and modem.
Some of the pine paneling that was popular for walls years ago has been repurposed as a ceiling for a foyer and utility room.
Even the red oak floors remain the same. The Kielborns have added central heating and air conditioning to the upstairs. They switched the cooking range from electric to natural gas, but that was just a cooking preference.
Ashley and Carl are also proud of their historical curtains in the living room. Their floral designed curtains once hung in Martha Berry’s study at Oak Hill.
Another historical accent is a large square mirror that hangs in a hallway. That mirror had hung in the McGinnis house for 50 years. 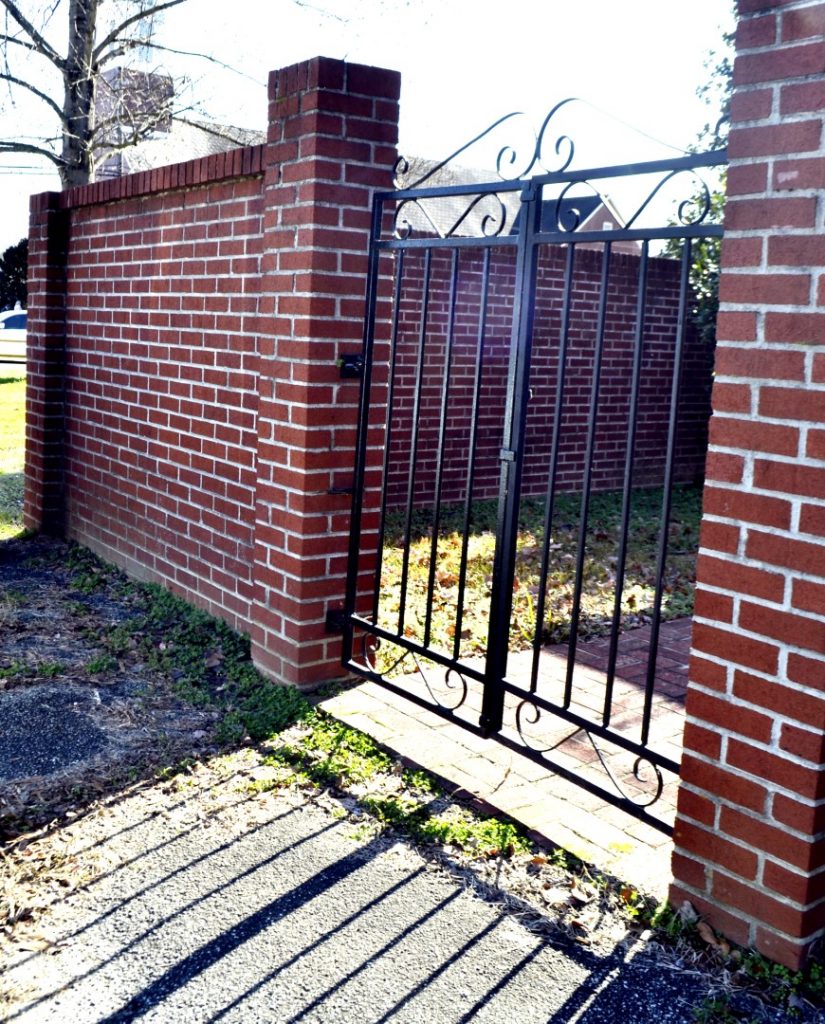 Another standout piece in the Keilborns’ home is their kitchen. The green bold cabinets are nestled in the background of a mammoth kitchen island. The top of the island is a large slab of white quartzite. The island contains not only a sink, but also a microwave that has a drawer and the base of the island has lots of storage room.
The family eats their meals at a large dark-colored wood table with six metal and wood chairs. Five white candles in a metal tray with succulent plants stuffed around them are the centerpiece of the table. The table is flanked by a china cabinet and a nostalgic popcorn cooking cart.
The house is bright and lively with big windows and patios on the side and front of the home. The house has numerous painted signs filled with inspirational messages.
Their living room is cozy with lamps setting a gentle mood. An upright piano resides against one wall adjacent to a white fireplace. The room has a large trunk turned into an end table with two fancy white antique chairs sitting on a rug. Facing the two chairs are two couches with fuzzy pink pillows and a low sitting coffee table.
The Kielborns said they love their home. Although they’ve been offered large sums of money to sell, they have no intention of giving up what they now describe as “home.”
They plan to work on the landscape maybe this year. They possibly are going to incorporate a small garden into the landscape. 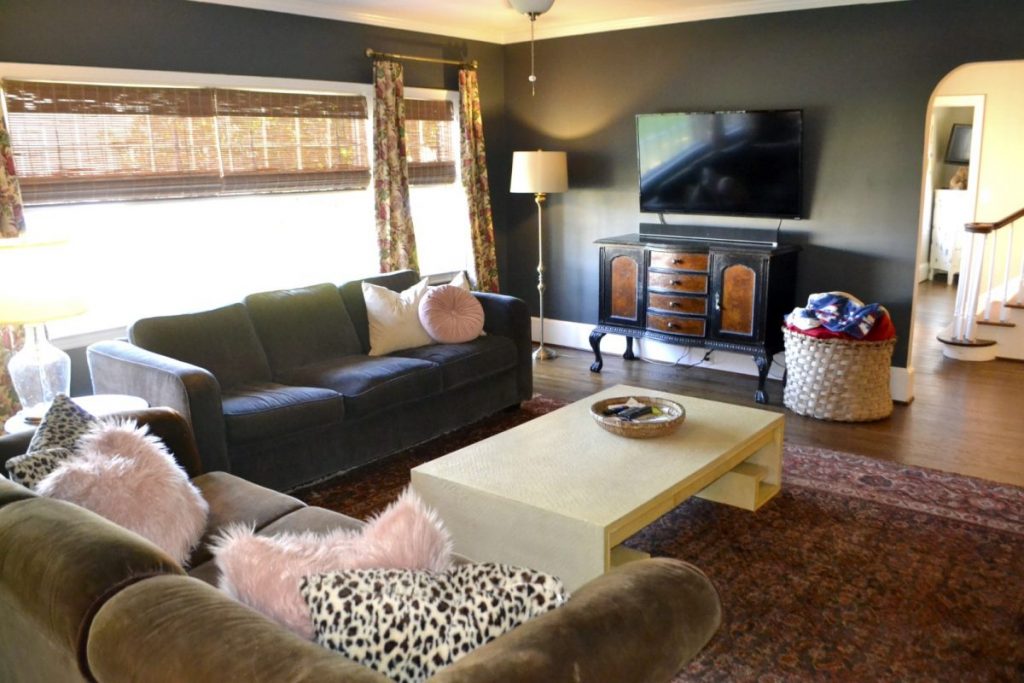 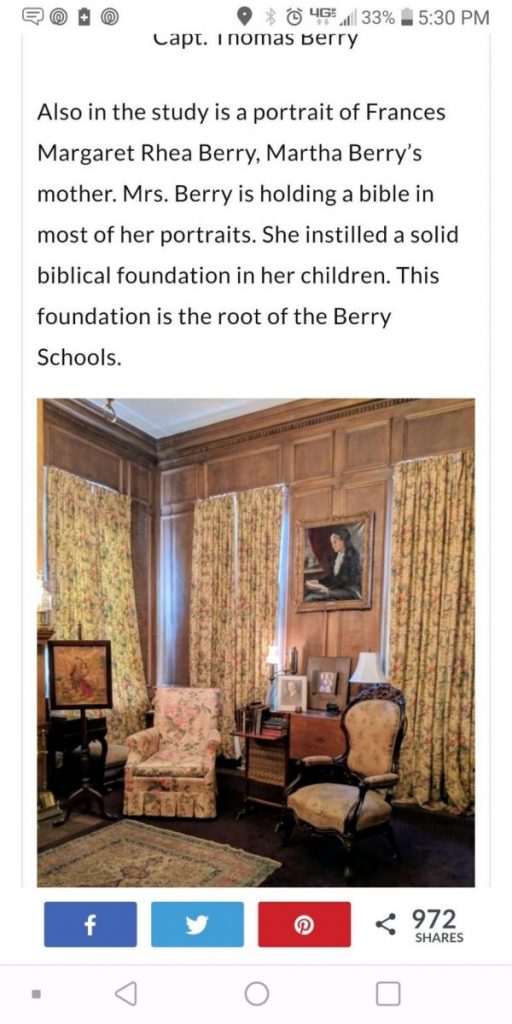 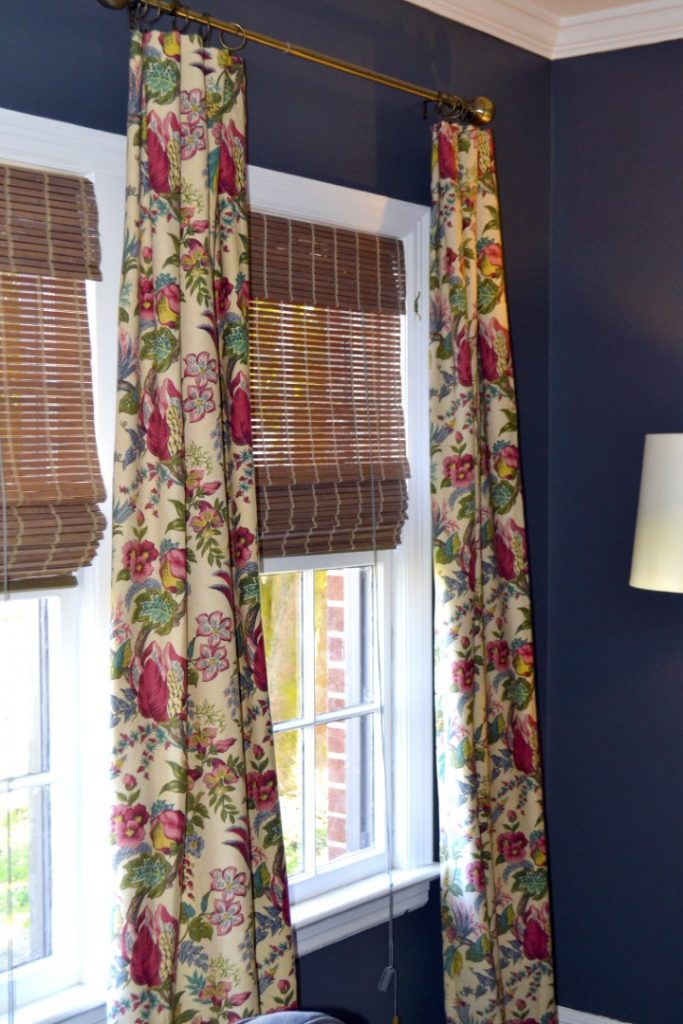 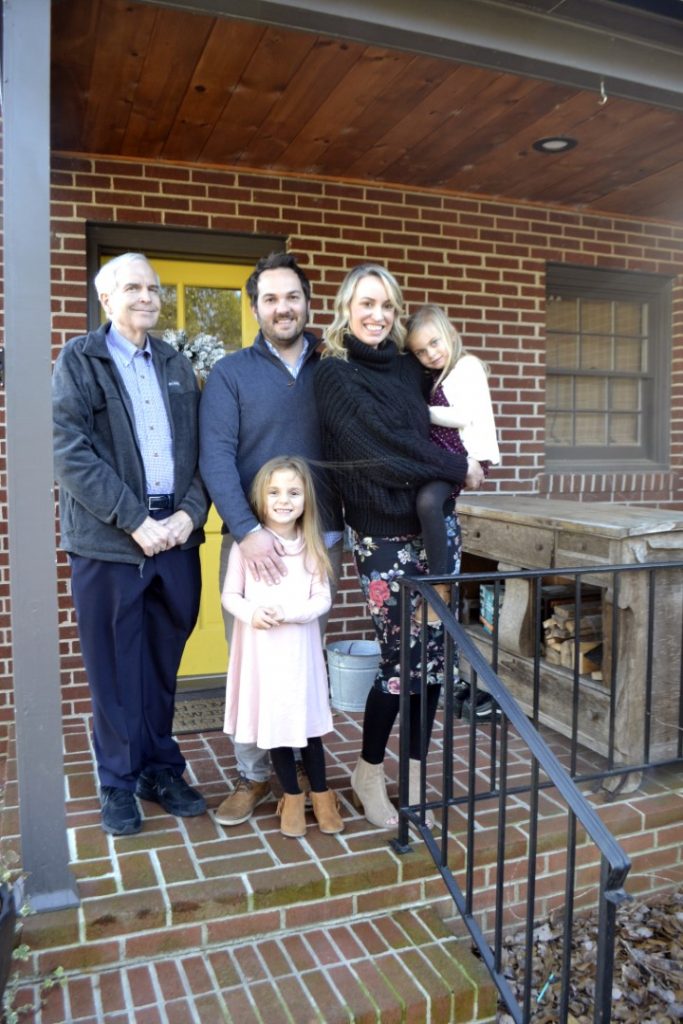 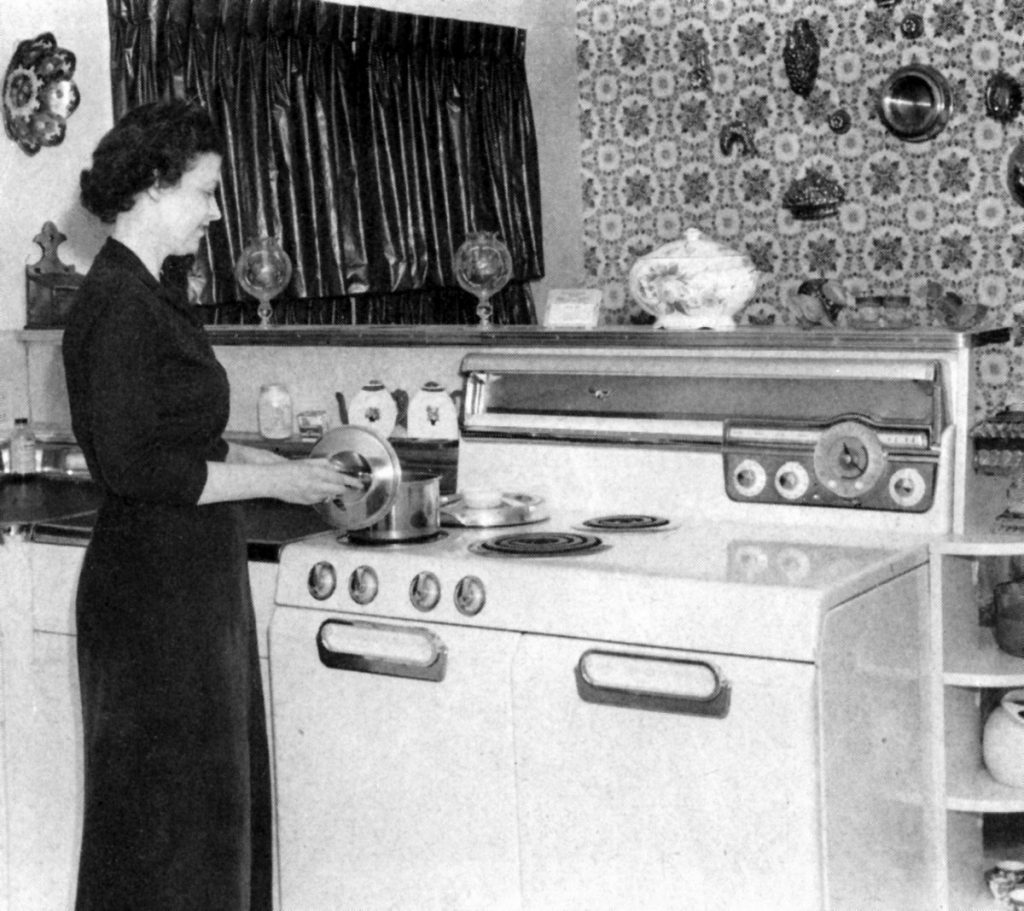 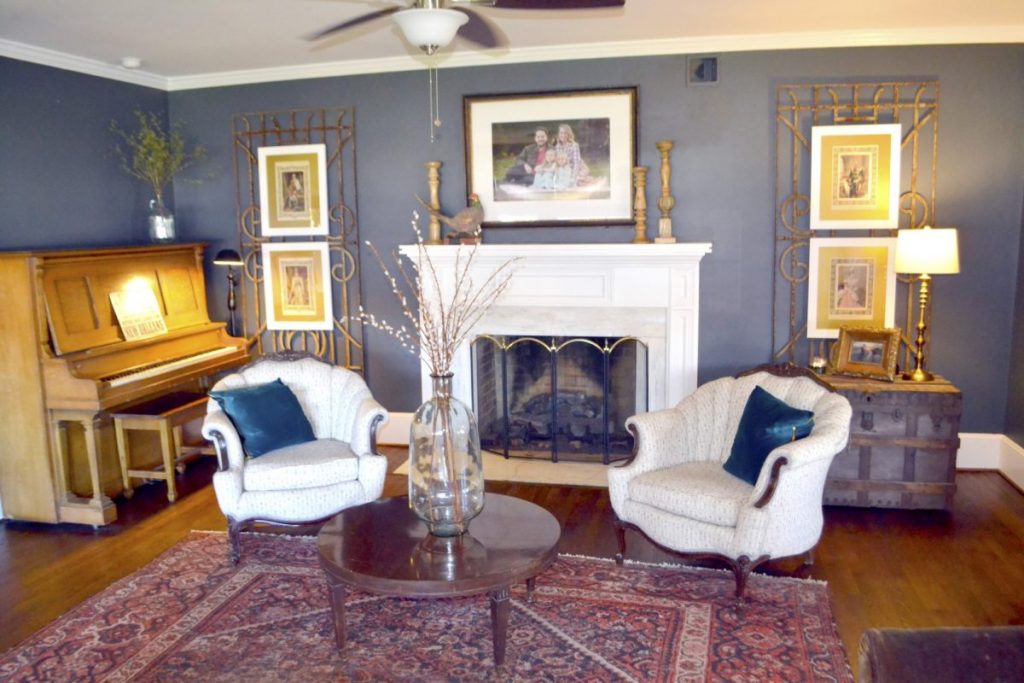 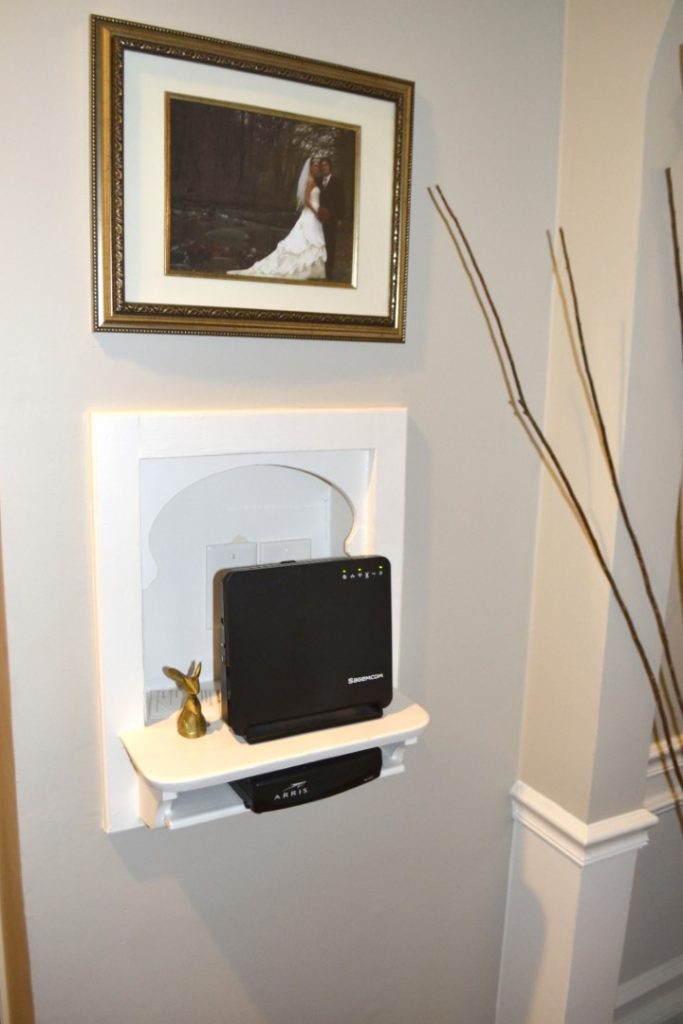 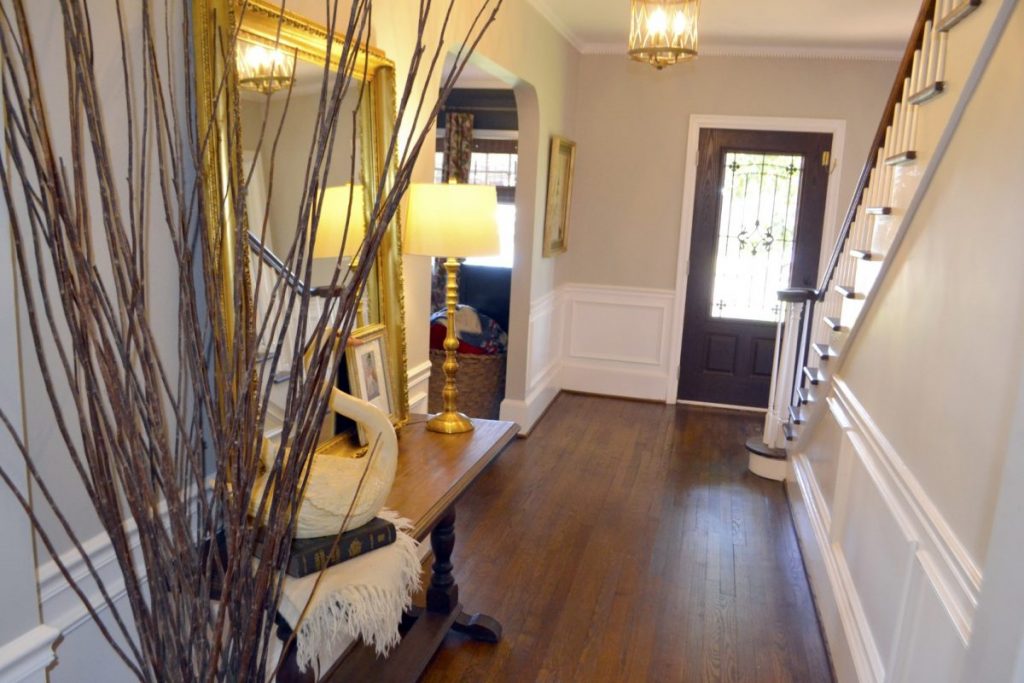