As the city contends with a new health advisory from the federal government, free drinking water is being offered to Summerville customers.
A tanker truck filled with fresh water is heading to city hall and should arrive tonight. It will be located in a parking lot in front of the fire department on Cox Street.
“Bring your own containers to fill up,” City Manager Janice Galloway said.
The water shipment is part of the city’s reaction to a phone call City Manager Janice Galloway received Friday afternoon from the U.S. Environmental Protection Agency (EPA).
A water test from Raccoon Creek showed a slightly higher amount of two manmade chemicals called Perfluoroctane Sulfonate (PFOS) and Perfluorooctanoic Acid (PFOA).
“[These chemicals] are used to make carpet, clothing fabrics, cookware, paper and packaging for food,” the city manager said.
The quality of the drinking water has not changed, city officials said. The advisory is part of changing standards from the EPA.
In the past, the acceptable standard was having less than 600 parts-per-trillion (ppt) gallons of water. The local creek water was 92 parts-per-trillion and within the acceptable limit.
Then in May 2016, the EPA changes its guidelines and suggests the new limit should be 70 ppt.
“Parts per trillion would be like one rain drop in an Olympic sized swimming pool,” said Carter and Sloope Engineer Chad Sipes.
People being exposed to these chemicals isn’t something new. They are found in a wide array of consumer products, including cookware.

The following is the city’s advisory on the new federal standards: 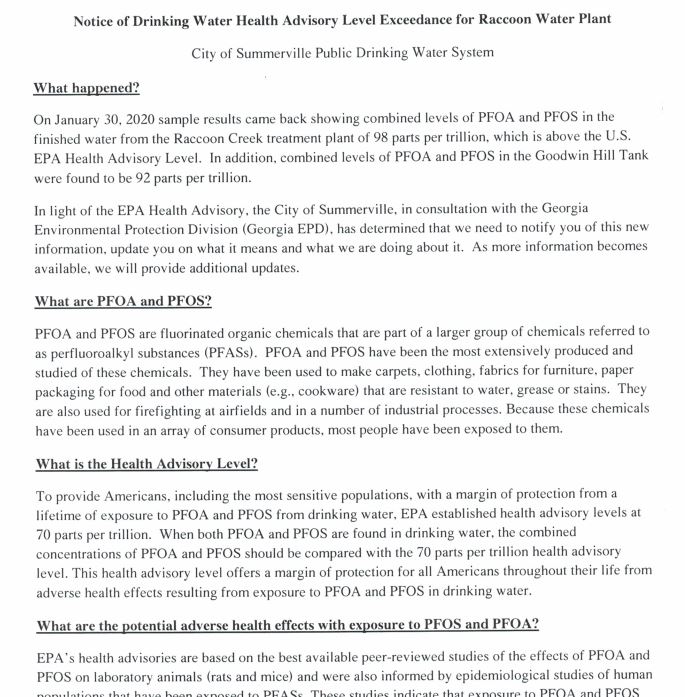 “What happened”
On January 30, 2020 sample results came back showing combined levels of PFOA and PFOS in the finished water from the Raccoon Creek treatment plant of 98 parts per trillion, which is above the U.S. EPA Health Advisory Level. In addition, combined levels of PFOA and PFOS in the Goodwin Hill Tankwere found to be 92 parts per trillion.
In light of the EPA Health Advisory, the City of Summerville, in consultation with the Georgia Environmental Protection Division (Georgia EPD). has determined that we need to notify you of this new information. update you on what it means and what we are doing about it. As more information becomes available, we will provide additional updates.

What are PFOA and PFOS?
PFOA and PFOS are fluorinated organic chemicals that are part of a larger group of chemicals referred to as perfluoroalkyl substances (PFASs). PFOA and PFOS have been the most extensively produced and studied of these chemicals. They have been used to make carpets, clothing, fabrics for furniture, paper packaging for food and other materials (e.g., cookware) that are resistant to water, grease or stains. They are also used for firefighting at airfields and in a number of industrial processes. Because these chemicals have been used in an array of consumer products, most people have been exposed to them.

“What are the potential adverse health effects with exposure to PFOS and PFOA”
EPAls health advisories are based on the best available peer-reviewed studies of the effects of PFOA and PFOS on laboratory animals (rats and mice) and were also informed by epidemiological studies of human populations that have been exposed to PFASs. These studies indicate that exposure to PFOA and PFOS over certain levels may result in adverse health effects. including developmental effects to fetuses during pregnancy or to breastfed infants (e.g., low birth weight, accelerated puberty, skeletal variations), cancer(e.g., testicular, kidney), liver effects (e.g., tissue damage), immune effects (e.g.. antibody production and
immunity), thyroid effects and other effects (e.g., cholesterol changes).
EPA’s health advisory levels were calculated to offer a margin of protection against adverse health effects to the most sensitive populations: fetuses during pregnancy and breastfed infants. The health advisory levels are calculated based on the drinking water intake of lactating women. who drink more water than other people and can pass these chemicals along to nursing infants through breastmilk.