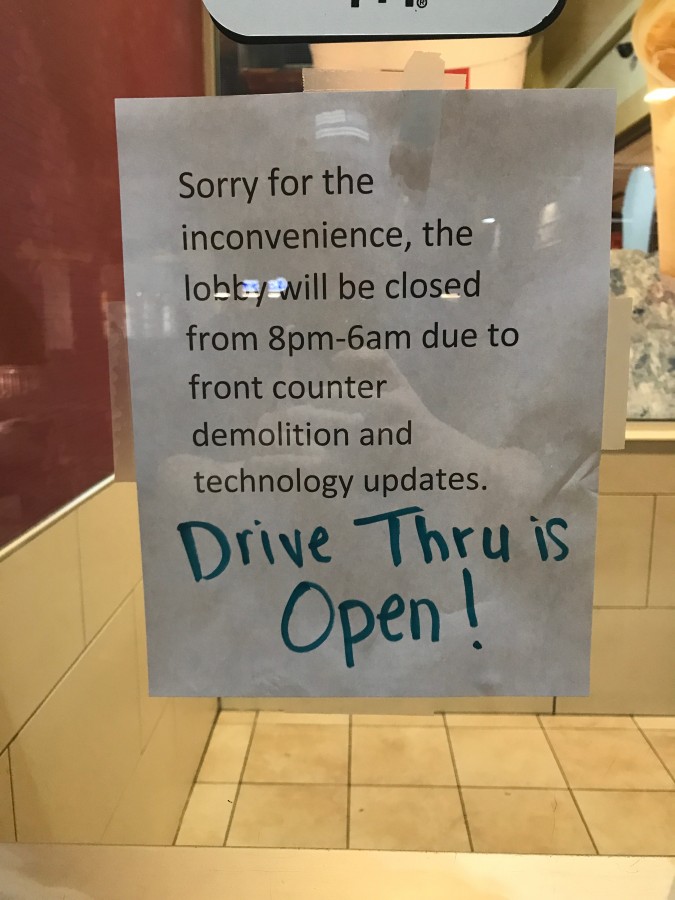 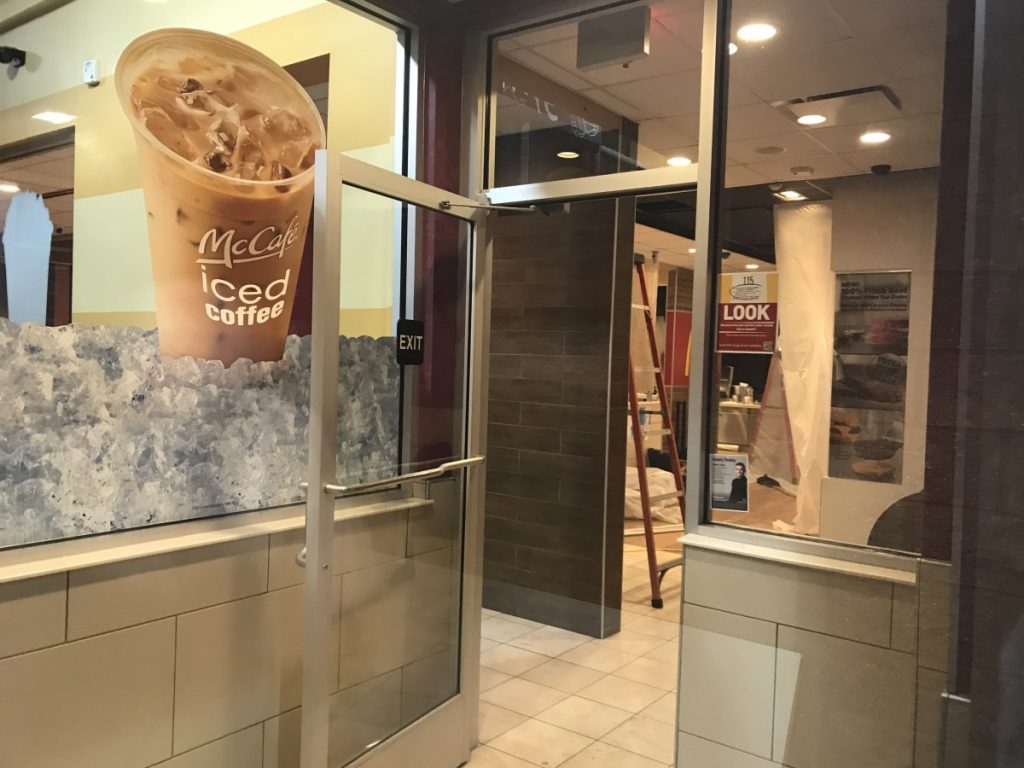 It looks as if the new owner of the Summerville McDonald’s is beginning some of the renovations and technology upgrades tonight.

Owner Jim Aaron, of Rome, plans to change aspects of the dining area and the drive through. Those changes will mimic at lot of those made at his Rome McDonald’s restaurant across from Mount Berry Mall.

“We have to stay relevant with today’s world,” Aaron said.

Table service will be offered. Customers can place their order and then find a seat. An employee will bring the food to the customer’s table, Aaron announced during a speech with the Summerville-Trion Rotary Club earlier this month.

Aaron was born and raised in Rome and is passionate about McDonald’s and making a difference.
“All I have ever done is McDonald’s, Aaron told the club members. “I am that story, I am that 16-year old that needed a job while going to Coosa High School.”
He put in his applications around Rome and was hired at the old West Rome McDonald’s.
“I immediately fell in love with it because I had friends that worked there,” Aaron explained. “I never really thought that it would turn into anything because I was that person that said it’s just McDonald’s.”
He worked his way through Berry College, majoring in business and accounting. He worked his way through Berry at the West Rome McDonald’s and he was very proud of that.
He explained that even when he was in Berry College as a junior and senior, in his mind he was working 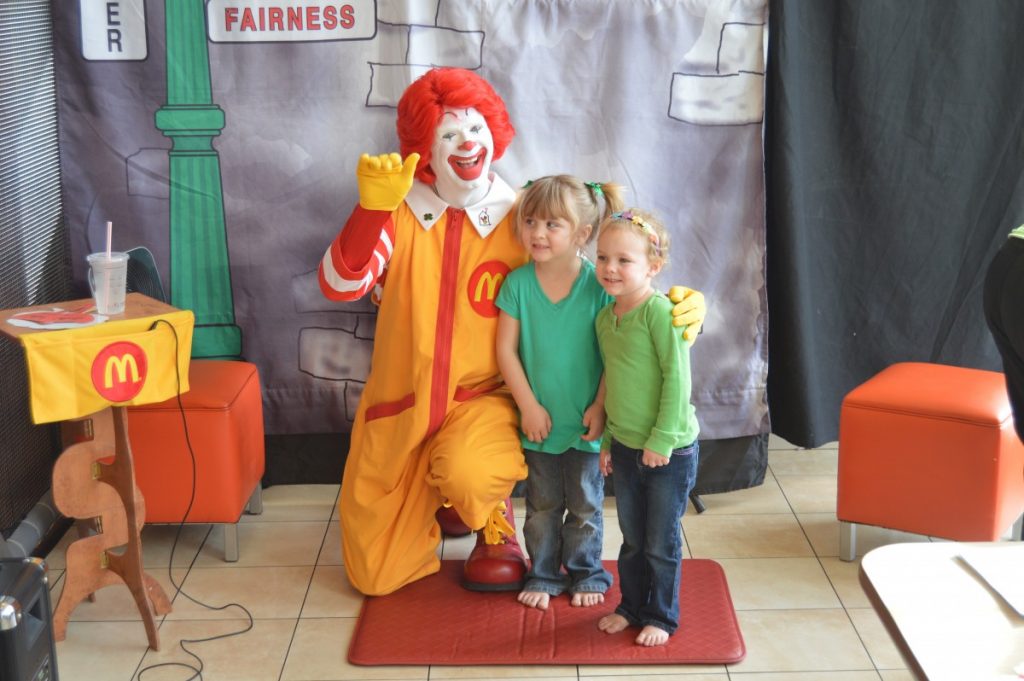 at McDonald’s to go on and conquer the world and do whatever he was going to do after college.
As Aaron was interviewing with businesses during his senior year at Berry, he interviewed with one of the leadership people from McDonald’s and the man said Aaron should work at one of the best brands in the whole world – McDonald’s.
He said, “You should consider us for a career and not just helping you pay your way through college,” Aaron added. “I think that it has worked out real well for me.”
He was a shift manager at night when he was at Berry.
“I knew the business really well,” Aaron said. “What I learned helped me move quickly through the assistant manager and store manager ranks, etc. because I already knew the system and processes.”
After he ran a restaurant a few years, he had the chance to move up to the McDonald’s Corp.
He worked out of the regional office for “30-something years” that handled most of the Southeast for McDonald’s in Atlanta.
“For 30 years I commuted from Rome where I lived – to and from the office,” Aaron continued. “I worked my way up to work for what I think is the biggest and best brands in the world.”
There are 37,000 McDonald’s across the globe.
Toward the end of that 37 years, he decided that he wanted to be an owner of his own McDonald’s as a franchisee.
He said that he enjoyed working for the company, but he wanted to make a difference at a different level. He said that he had got to where he was in meetings all the time and felt that he was too far removed from the restaurants.
“I enjoy the restaurants, I enjoy people and talking with customers,” he continued.
He said that he was fortunate to have a good record and that not everyone is able to be a McDonald’s franchisee. He got a chance to buy a couple of McDonald’s in Tennessee, near Knoxville.
“I have seven restaurants now and it is two and a half hours from the Martha Berry McDonald’s across from the mall in Rome to the Tennessee McDonald’s he owns.
He bought the Mount Berry McDonald’s about a year ago and was the one who rebuilt it. He doesn’t own the other two in Rome. He has been slowly adding them in Tennessee and in Georgia since then.
“I do want to get bigger,” Aaron said. “When I got the chance to buy the Summerville McDonald’s from a great friend of mine who had been with the company for over 40 years – that was what took me from four to seven McDonald’s. It was a perfect fit for me.”

The Summerville McDonald’s was part of a larger purchase he made in October. He also bought the LaFayette and Chickamauga stores as well.
Aaron and his wife, Mary have two grown children.

MAKING A
DIFFERENCE
Aaron listed four things that he wants to make a difference in with his McDonald’s.
“These are the four things that I am passionate about: making a difference for our people, making a difference for our customers, making a difference for the community and making a difference for our brand,” Aaron continued.
Aaron said he loves the crew people that work for his McDonald’s, he loves the crew managers and he wants them to know that he believes in them. He added that he loves and appreciates them.
“Our business is not for the faint of heart because I know it, I have been in it for years,” he added. “It is not easy, but we are passionate about doing it right.”
He went on to explain all the benefits that he provides his employees.
“I hope it comes across that I am passionate about what we do – good food, great service and a clean restaurant,” Aaron said.
He then went over the food that the McDonald’s serves – 1oo percent beef, no steroids, no antibiotics, and no preservatives chicken. He said they also don’t put preservatives in their buns.
“We are passionate about our food,” Aaron said explaining about the local restaurant making their own biscuits from scratch and not frozen biscuits. “That is big, big deal for me and we are working to make them even better.”
Eighty-five percent of the McDonald’s use frozen biscuits. Aaron’s restaurants do not – they are made from scratch.
When he bought all of the seven McDonald’s, he was passionate about being in the schools, supporting them and the students. He said they also support other endeavors in the community.
“My philosophy is that if you do business in the community, you have to give back,” Aaron said.