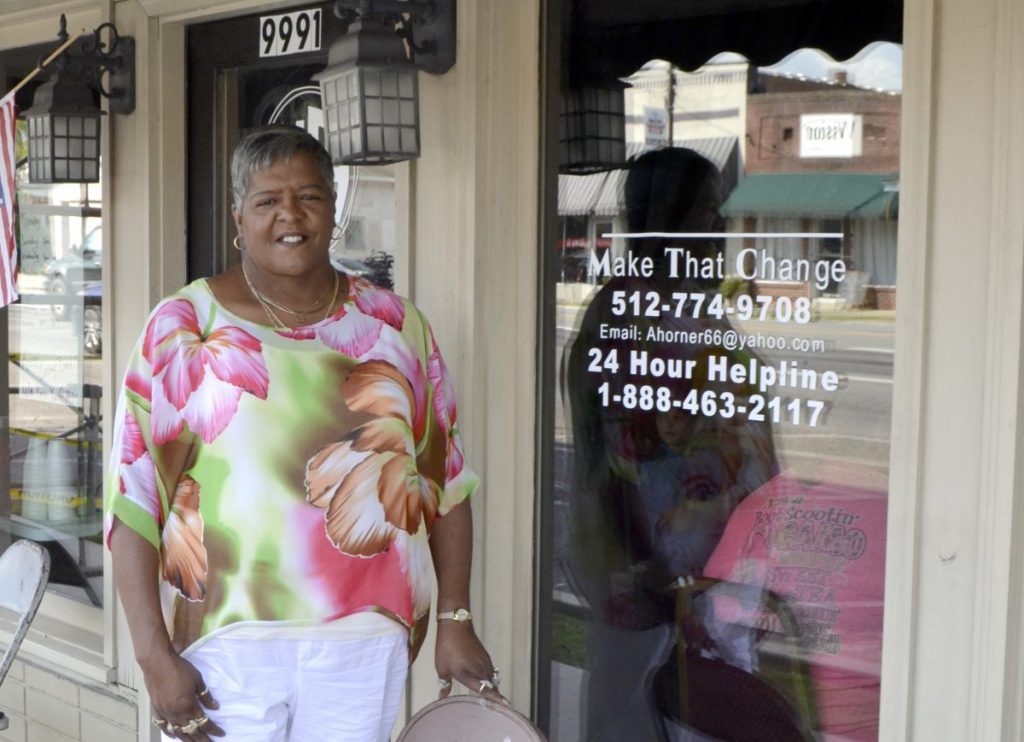 Angela Horner AT HER STOREFRONT Meeting Place For Program

Some of them started smoking marijuana at the age of 12 or 13. One started using meth in her 30s.
However, Angela Horner is aiming to derail people’s drug addiction through her Narcotics Anonymous (NA) program in downtown Summerville.
“I’m an alcoholic and addict,” 29-year-old Sheree Jones told The News during an interview at the NA program located at 9991 Commerce Street.
Jones is one that was introduced to drugs at an early age. Around the age of 13, she started drinking alcohol and smoking marijuana. 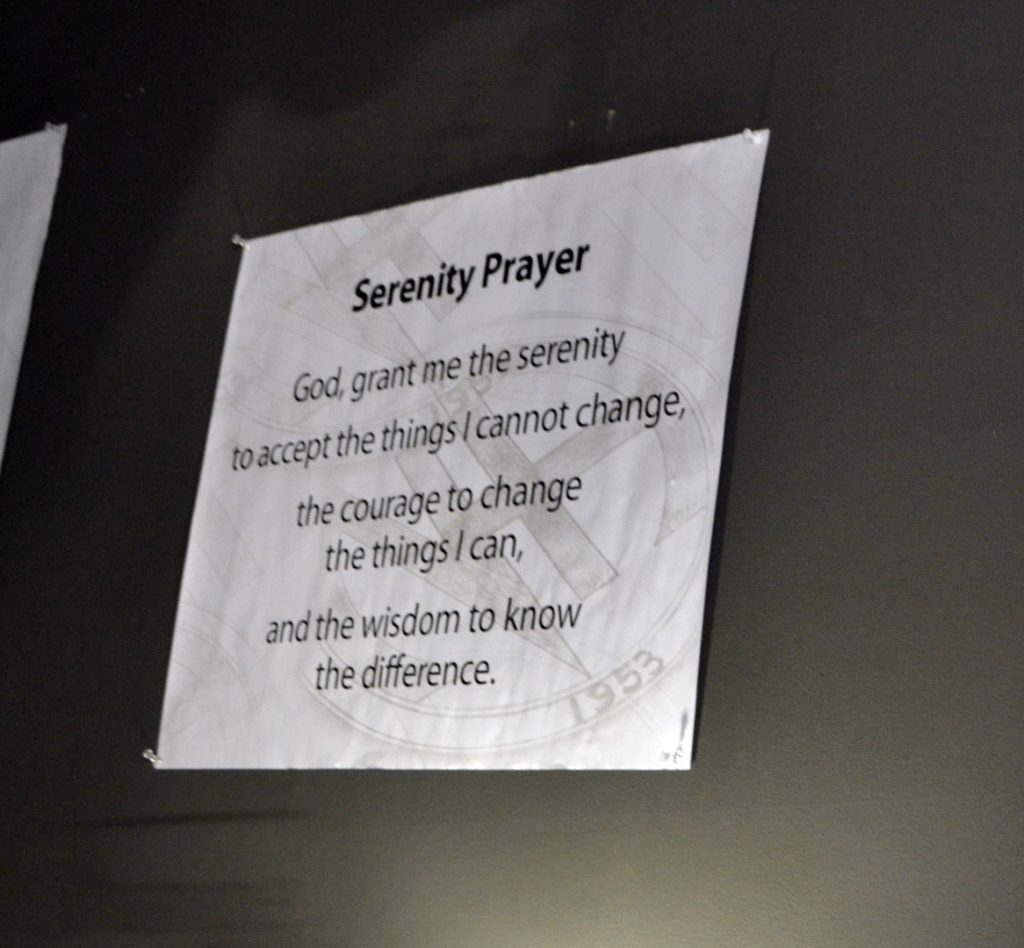 A methamphetamine habit soon led to her personal destruction. It was one habit she had no intentions of starting.
She was partying with some friends at a hotel when she was introduced to meth. A friend was rolling something strange into a cigarette form.
“I thought it was weed. I just thought it was a different way of smoking it,” Jones said.
A different type of euphoric high struck and Jones began bragging on what she thought was her friend’s batch of marijuana.
“It was great,” Jones recalled that first meth high.
Although her friend explained afterward it wasn’t marijuana, the addiction was already entrenched. The search for that first meth high started. That began the period of things being not so great. It’s the time when meth overrides relationships, work, life and soul, according to local addicts.
“You don’t know if its morning or night or what day of the week. You don’t know when the last time you’ve called your mom,” Jones said. “It’s not a good time anymore.”
Breanna Carter, 26, is also another person using Horner’s daily NA meetings to recover from her drug habits.
“I started smoking marijuana at the age of 13 and started smoking meth at age 20,” Carter said.
Friends and family showed her how to use meth. She was working at a fast-food restaurant and needed some energy for work. That’s how the insidious meth addiction started for her.
Horner says Chattooga County needs to realize how bad the problem is entrenched in the community.

“There is no age limit on when you start. It’s here and it’s done its damage,” Horner said.
All the participants at the NA meeting talked about the destruction in their lives. It’s during this period they realize the problem.
“I started realizing it when I started to lose everything,” Carter said. “I started losing myself. I lost my confidence in me. I told myself that I was not good enough, no one would love me for who I am.”
Not everyone at the NA meeting started off with drugs at a young age. Crystal Peek, 35, started using meth four years ago. She tried it out of anger.
“I got pissed off and went and bought a pot pipe,” Peek said.
She then realized she had the wrong type of pipe for meth. After purchasing the correct type of pipe, she began her meth habit.
“Three weeks later I realized I had not been to bed,” Peek said. “I just went off the deep end.”
Life began to crumble immediately. She lost her children. She lost her husband and her house.
She ended up homeless for eight months in Floyd County.
“I was sleeping in the woods and then a stairwell in a church,” Peek said.
A police officer spotted her sleeping in West Rome Baptist Church’s stairwell and that’s around the time Peek began her recovery journey. She was introduced to a halfway house for drug users and other NA type programs. Now living a clean, drug-free lifestyle, Peek is a supporter of Horner’s efforts to continue local NA meetings. She even likes Horner’s plan of starting a halfway house in Chattooga.
“We’ve been donated a house,” Horner said.
Now she is working on obtaining a non-profit tax exemption before launching operations at her donated house. She needs money to keep the mission afloat.
“That is why I go broke trying to help people here,” Horner said.
She pays about $550 a month on keeping the downtown storefront open. Horner, once homeless and addicted to crack cocaine, empathizes with locals fighting their drug demons.
She left Summerville when she was 18 years old. She moved to Texas and her crack cocaine habit skyrocketed.
“I became homeless and lived on the street out there for five years,” Horner said.
It took seven different halfway houses and visiting a NA program to get Horner away from drugs. She remembers one NA program in Austin that was open 24-7. They would have NA meetings every three hours. After those meetings, they would fellowship, play cards, watch television, etc.
When Horner moved back to Summerville, she immediately realized the need. There were plenty of addicts and no constant NA meeting places.
Horner tried meeting at the schools or even asked the Summerville City Council to use a room at one of the recreation centers. She didn’t have any luck with the government. Instead, she had some private help and obtained use of the storefront.
“I started with one person and now I’m up to 40,” Horner said. “Saturday and Sunday and Mondays, it will be so crowded that I’ll run out of chairs. . . My only problem right now is keeping up with the expenses.”
She sees the need and hopes others will help. Her phone number is 512-774-9708 or you can email her at ahorner66@yahoo.com .
Horner sees the effects meth has on this county. Although she has never tried that drug, she realizes its claws dug into people’s lives.
“I don’t think I want to try it. They tell me, ‘Yes, Ms. Angie it’s worse than being on crack cocaine,’” Horner said.
Horner is also developing a local team of community supporters to help with NA group. One board member is local resident Sheree Cook Hurley, who wants to help out the community. Hurley says it’s going to take the community’s involvement get the halfway house going.
“Her future plans are on hold, until she can get the NA financials under control. She needs the community to help her. She donates all her time every day of the week and is just a phone call away if anyone of her clients/attendees need her,” Hurley said. “. . .If she could get help with the NA which is already established, it would free up her resources to pay for the 501c and start the halfway house.”

FOUNDED IN 1953
Narcotics Anonymous is a global, community-based organization with a multi-lingual and multicultural membership. NA was founded in 1953. Since the publication of its Basic Text in 1983, the number of members and meetings increased dramatically. Today, NA members hold nearly 67,000 meetings weekly in 139 countries. They offer recovery from the effects of addiction through working a 12-step program, including regular attendance at group meetings. The group atmosphere provides help from peers and offers an ongoing support network for addicts who wish to pursue and maintain a drug-free lifestyle. Their name, Narcotics Anonymous, is not meant to imply a focus on any particular drug; NA’s approach makes no distinction between drugs including alcohol. Membership is free, and they have no affiliation with any organizations outside of NA including governments, religions, law enforcement groups, or medical and psychiatric associations. 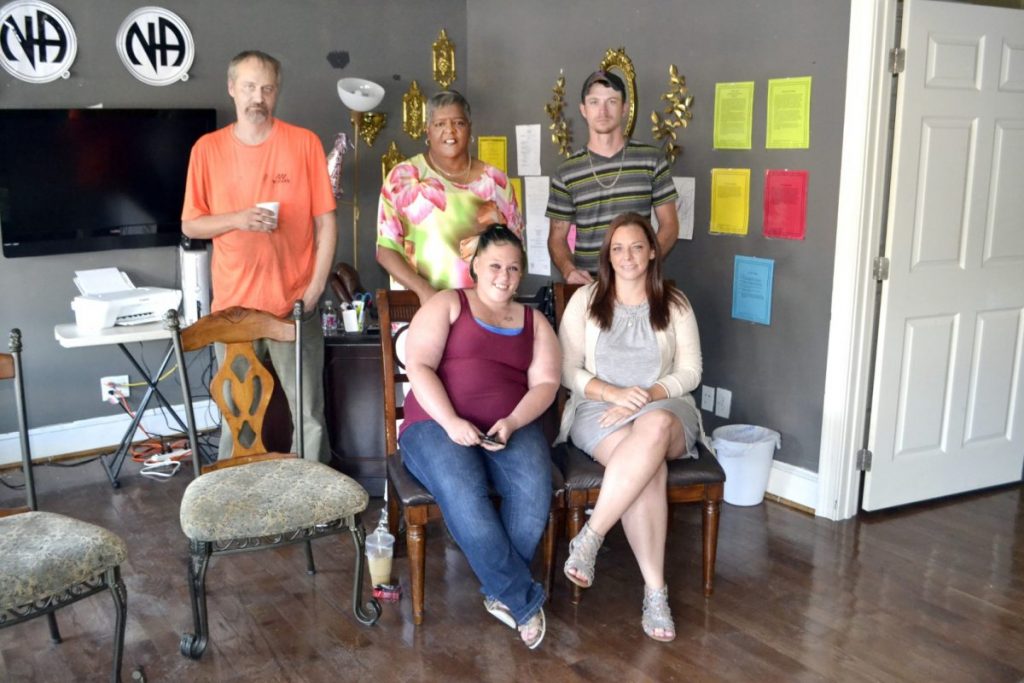 Angela Horner (CENTER, BACK) WITH Some Of Those In The Program 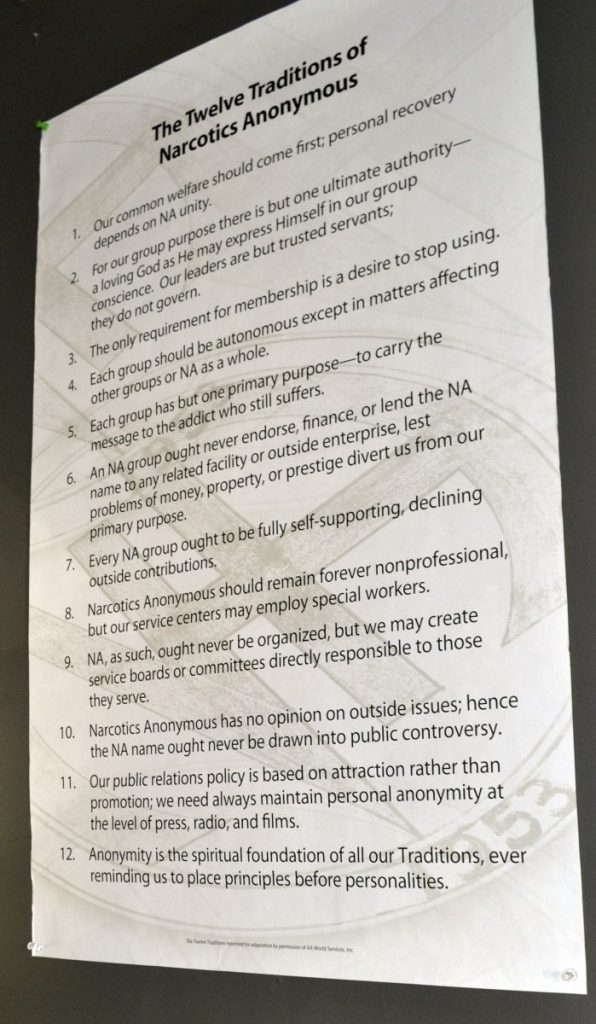